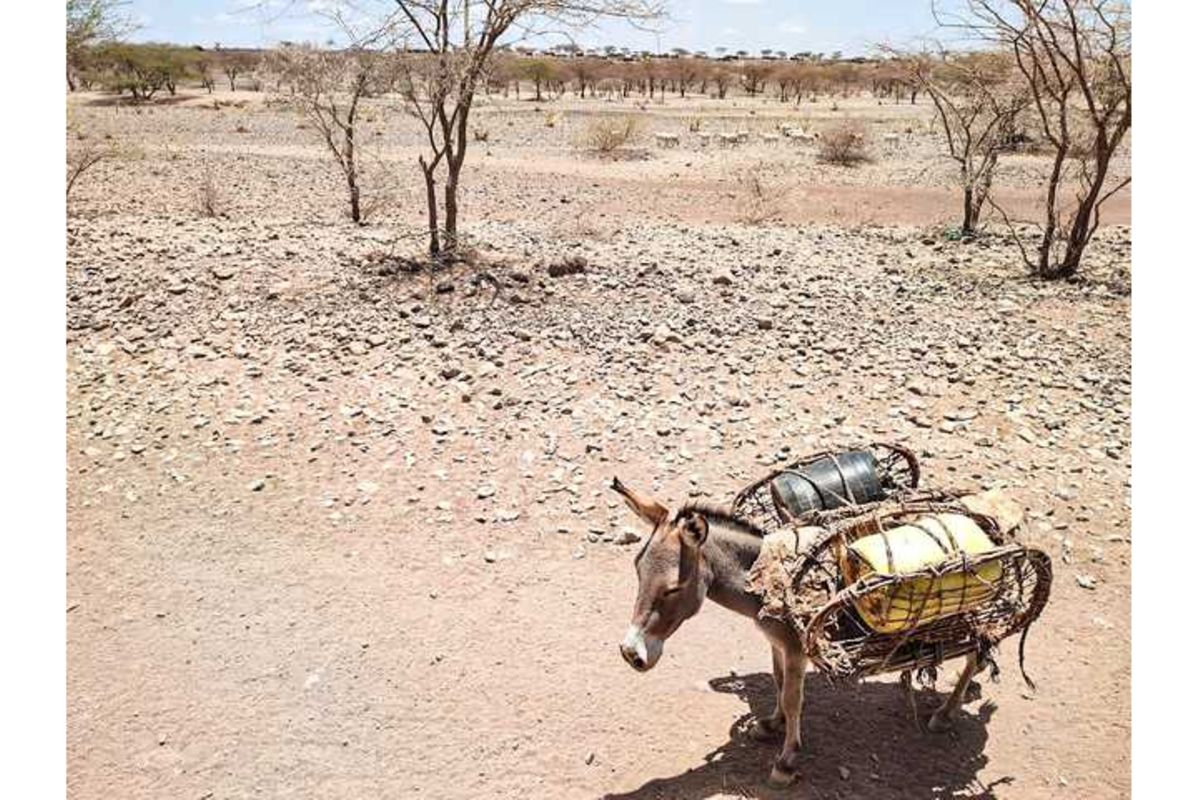 Five months ago Jackline Parseen freed five hours from her daily domestic schedule. How did that happen? She had closer access to water. For more than 20 years, she had made drooping trips to Irkilunyieti, a seasonal river in Kajiado East, Kajiado County. When there was no water, she would dig shallow wells along the banks to get water.

Her trek to the river would start at 6am, with her donkey carrying four empty 20-litre jerricans. At 4pm, she would arrive home with her drums full, her donkey and herself, worn out and almost collapsing from hunger.

Now, her journey begins at 7am and ends at noon, thanks to the solar-powered borehole drilled by World Wide Fund for Nature Kenya (WWF-Kenya) and its partners in Nasaru-Olosho Conservancy in Kajiado East, Kajiado County. It’s nearer to her home in Esitet village.

“There are days that my sole, head and back hurt so badly that I wished I rested and found some herbs to relieve my pain,” she says as she pours water from one jerrican to another. “But I had no choice. My family needed water. I’d hobble to the river until I think my body got used to it.”

Pastoralists primarily inhabit Kajiado East and with the ongoing drought, communities here survive on well-wishers distributing food. Livestock is their main source of income—and milk and meat their staple foods—but because of drought, they have died in hundreds.

She says the extra hours allow her to visit her neighbours to request food aid. “The days, I trekked to the river to fetch water, I’d miss well-wishers distributing food during the mid-morning or afternoon hours,” says Parseen, who has six children.

“And I’d be too tired to start going round the villages to seek some. Now, even if the chief hadn’t told me, if I see a woman carrying a sack, I’d know where to run to.”

Well, Ms Parseen is happy that the distance from her home to the water point has reduced.

It is from Tanzania’s forest that she receives water. But she doesn’t trek like Ms Parseen.

In this forest is a spring. And 1,500 locals, including 825 women who live adjacent to the Loitoktok forest station, formed a community forest association permitted under forest laws.

They pooled resources and piped water from the spring to their homes. And so Ms Muli does not need a donkey to ferry water. She only needs to step outside her kitchen with a cooking pot, walk less than a minute to the tap and fetch water.

Had she not had the tap water, she would be making the daily exhausting trips to a secondary school 10km away to fetch water for her domestic use, including watering four dairy cows.

“I’m so relieved,” she sighs. “Collecting grass, fetching water and going to the farm all on the same day would leave me tired out. Now, if I’m not at the farm, I’m only thinking of grass for my cows.”

She only pays a monthly fixed charge of Sh200 to the group to cater for maintenance.

In another village, 91km away from Nasaru-Olosho Conservancy, Mercy Moses is far better placed than Ms Parseen and Ms Muli in terms of diversity. The resident of Impiron, Kajiado South, has easy access to two water sources.

One, she has a well at her homestead. She uses the water for all other domestic needs except cooking and drinking. This is where the second option, Impiron spring, fills the gap. The spring is only a 10-minute walk.

She walked down a hill leading away from her homestead to find me at the spring enjoying the view of the sparkling clean water gushing out from pipes dipped into rocks sheltered by a forest of huge indigenous trees.

“I love the water from the spring. It’s cool. It’s clean. It’s pure. You drink it directly without the worry of impurities,” she says excitedly.

Ms Parseen, Ms Muli and Ms Moses live far away from one another. But one thing remains the same—they have reliable and sustainable access to water, a fulfilment of their right are provided for in Article 43((d) of the Constitution, which states: “Every person has the right to clean and safe water in adequate quantities.”

But on the other hand, for women in Marsabit County, 600km away, this right is just a concept. Of the 12 women I interviewed in Dukana and Shankera villages, none of them mentioned accessing water from a river or spring.

To all of them, a borehole was the top option and often they dried up and they had to either trek to reach the next with water or wait for charity organisations to supply them.

And often, the supply was done weekly with each household receiving three jerricans of 20-litres, yet the county ranks second with highest fertility rates at seven births per woman after Mandera (eight births per woman).

They also have the worst option of buying water at Sh70 per 20-litre jerrican. Presently, Marsabit is among the 29 counties—with its population comprising 5.1 million Kenyans—in need of water, food and animal feed.

The drought has killed their livestock, their main source of income. And the thought of buying water in these extreme conditions is leaving women in distress. “They are selling us a 20-litre jerrican at Sh70,” says Badhole Adhano Doko, who lives in Shankera village.

“The same goes for Sh50 during rainy seasons. We don’t have money. The goats have died. Can’t they have mercy on us?” she cries out.

But what makes the big difference between Kajiado and Marsabit women?

In Marsabit, women are surrounded by flatlands of pebbles. The few remaining acacia trees, which have been badly beaten by the extreme heat, are spread out across the dusty plains.

There are no tree planting exercises going on here to restore the landscape. And even if there was, the trees “cannot survive and in any case, if they did, the livestock would feed on them,” says Golo Adi, who lives in Dukana village.

Marsabit hasn’t had sufficient rainfall in the last four seasons, to keep alive a sapling.

The situation is different in Kajiado. In Kajiado South, where the homes of Ms Muli and Ms Moses are situated as there are forests—Loitoktok and Entarara. Ms Parseen’s home is within Nasaru-Olosho Conservancy in Kajiado East, an area protected from extreme destruction of biodiversity.

Kajiado South is primarily an agricultural area, whereas Kajiado East is a zone for pastoralists. The communities here have committed to restoring the degraded landscape and safeguarding it from further damage, thanks to a partnership between World Wide Fund for Nature, conservancies, local communities, and government agencies.

Landscape restoration is crucial to sustainable recharge of groundwater, which then continuously and reliably feeds water outlets, including springs, boreholes, and wells.

At Nasaru, apart from constructing the borehole, WWF-Kenya works with the conservancy management to educate locals on the importance of trees.

“The locals here are very receptive. Unlike before, they are now at the forefront of speaking against cutting down trees for burning charcoal or firewood and this is very encouraging,” says Veronica Shaga, a ranger at Nasaru-Olosho Conservancy.

The Natural resource specialist and programmes coordinator at WWF-Kenya, Dr John Kioko, says they also encourage the pastoralists to shift from extensive rearing of livestock to intensive practice such as zero grazing. In extensive practice, the pastoralists move from one area to another with their herds, leading to absolute clearance of vegetation cover in thousands of hectares.

But what’s the connection between vegetation (trees, grass and shrubs) and rain? “Trees give birth to rainfall,” reckons Dr Kioko. “Drought means no water and there is no water in the desert because there are no trees.”

The trees transpire, then this vapour cools into water that rains. At this stage, vegetation, take its role. First, their leaves slow down the speed of water. Second, they hold the water. Hence, huge amounts of water seep into the ground and that’s how the groundwater is recharged.

At Entarara forest, I met Raphael Maen, chairperson of Entarara CFA. His association formed last June has 200 members, of whom 150 are women. He says they target to plant 2,500 indigenous trees in the forest by the year-end, and an equal number on members’ farms.

At Loitoktok forest, Philip Kosgei, Kenya Forest Service(KFS) forester in charge; Emanuel Mayiani, chairperson of Loitoktok CFA; and a number of the association’s members, including Ms Muli, led me to a section of the forest where restoration activities are ongoing.

Mr Mayiani says 400 members currently occupy 54 hectares in the forest under the Plantation Establishment and Livelihood Improvement Scheme provided for in the Forest Conservation and Management Act, 2016.

Each member occupies a plot on which they grow crops and plant trees. They look after the trees for the four years they are allowed on the farm. He says KFS, in collaboration with WWF-Kenya, has trained the members in establishing tree nurseries. And the seedlings they plant are secured.

In the past year, they planted 15,000 indigenous trees in the forest and an equal number in schools and hospitals, and on the roadsides and farmlands in the Kimana, Rombo and Entonet areas.

“There has been a 50 per cent survival rate of the trees we’ve planted so far,” he says. “This rainy season, we also plan to plant 15,000 indigenous trees in the degraded sections of the forest and replace the seedlings that failed. We also target to plant another 15,000 trees in the public facilities within communities adjacent to the forest.”

The forester is happy about the fruitful partnership with the CFA, noting that “the CFA members are actively involved in planting trees and protecting them from destruction.”

But then it’s not enough to encourage communities to conserve the forests, notes Mr Mayiani.

“You offer them an incentive that shows the immediate benefits of having a healthy ecosystem and with that, they religiously commit to safeguarding it,” he says.

For that reason, they resorted to beekeeping, an income-generating activity, within the forest. They reached out to WWF-Kenya for support, which bought them 100 beehives. And in August 2020, they started an apiary in the forest.

Last July, they harvested 42kg honey. They had a ready order and they sold it out. Locally, one kilogramme of honey goes for Sh600, but in Nairobi city, the same sells at Sh1,000. “With the apiary, they see the importance of protecting the forest and ensuring the trees they plant survive,” he says.

And their results, based on groundwater budgets calibrated with measurements of drainage and transpiration in a cultivated woodland, demonstrated that groundwater recharge was maximised at intermediate tree densities.

Sadly, as it is now, in one part of Kenya, boreholes are drying up because there are no trees to recharge groundwater, while in another, trees are giving birth to rain and recharging the groundwater.

Until equality in restoration of landscape is achieved in Kenya, women in Kajiado such as Ms Moses will continue to celebrate with statements like “I love water from this spring,” while those in Marsabit such as Ms Doko will be crying out for help, saying: “They are selling us a 20-litre jerrican at Sh70, yet we don’t have money because all our livestock have died in drought. Can’t they have mercy on us?”