Leading sports betting firm Betika continues to invest in sports in the country and has today deployed football kits, nets and balls to over 200 football teams across the country. The firm, which has in recent times been seen as the champion of sports in Kenya, participated in a kit deployment exercise in Camp Toyoyo Grounds as part of its Betika Na Community initiative.

The program aims to invest in the youth by nurturing talent through Sports, Arts and Culture supports the youth in the community through provision of uniforms, financial support, kits, balls, nets and other sports equipment.

Speaking during the event, the firm’s Business Head, Mr John Mbatiah said, “We are happy with the progress Betika na Community has made in transforming lives in Kenyan communities. Since we began the initiative, we have been overwhelmed by sponsorship and event requests from football teams and clubs all over the country requesting for support. Even though we have already deployed team kits, footballs and nets to over 1,000 football teams across the country, there is still a gap to satisfy all requests. We therefore call upon other industry players and sports stakeholders to rise up to the challenge and join Betika in supporting all the teams”. 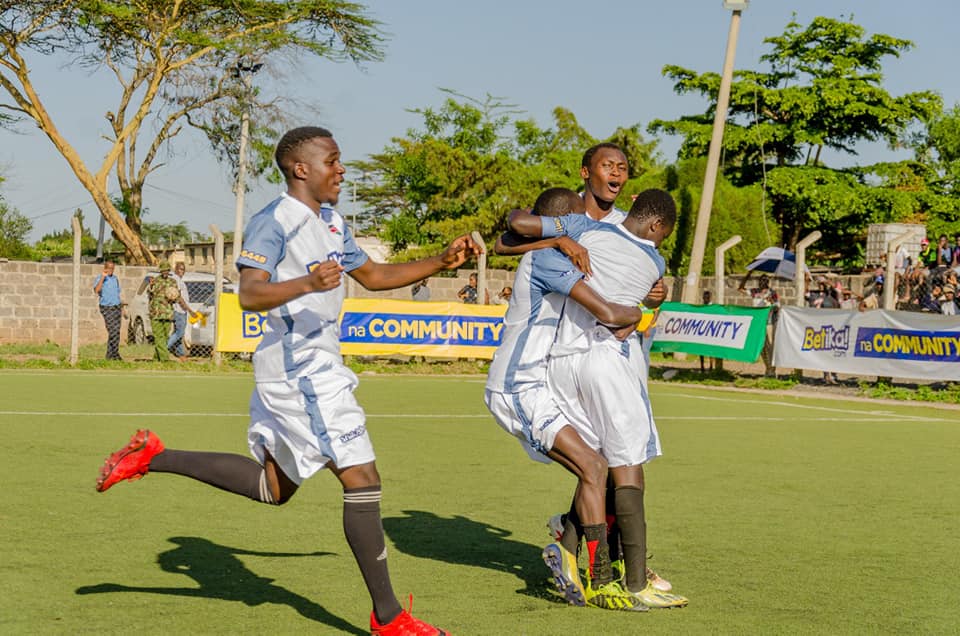 Mr Mbatiah also noted that the level of football talent in Kenya is improving and that the firm is committed to ensuring that it develops even further.

The firm hosted Jericho All Stars and Kibera Black Stars to an exciting exhibition match after the kit handover exercises that saw the two teams walk away with 150,000/= in prize money.

Betika has carried out and supported many sports initiatives across the country with its flagship Betika Na Community football tournaments in Machakos, Meru, Kisii, Nyamira, Kakamega and Kisumu since November 2019. This is in addition to a three-year sponsorship of Betika National Super League in a 100M partnership deal with Federation of Kenya Football (FKF) which has seen an increase in the level of competition in the league.

8 Things You Should Never Tell A Single Kenyan Lady

Roads to be Closed During Moi Funeral Service

Vera Sidika’s man, Jimmy Chansa is on the hot seat as Kenyan fans on his social media pages are questioning if he really is a doctor.

He was introduced to us with his title Dr. Jimmy Chansa, Vera’s new bae and the ladies on social media could not keep calm. So many of them congratulated her for the upgrade, I mean a cute, rich doctor? Definitely.

During his Instagram segment, ‘Ask Me A Question’ a curious fan -who seemed like s/he was Kenyan- asked him about his career schedules.

“I thought you should be in hospital saving lives.” He asked

He was quick to respond was short and straight to the point. Jimmy Chansa said,

saving them too😊 its just how u fix your timetable.

The two met in Tanzania after when she was high and she says they started talki8ng and next thing they started dating.

Vera  Sidika We have so many things in common and he is the love of my life. I really do love him. We have been dating for five months now.

“When you meet someone, you feel like he is the one. It´s not a matter of time but respect and understanding. I´m 30 and I think I am ready for kids.” She said.

Fans even asked him to post pictures of him in his hospital uniform to prove manz is still a doctor. So much pressure.

Funding for the fight against HIV Aids has reduced says NACC

The National Aids Control Council (NACC) is warning that gains made in containing the spread of HIV Aids could be eroded if funding towards the campaign is not increased.

According to the council, donor funding for the fight against HIV Aids has dropped from 90 to 60 percent and is likely to go down further in future.

Already, the country’s HIV prevalence has dropped from 5.6pc to 4.9pc in the last five years according to the latest data from NACC.

Council Deputy Director in charge of HIV and investment Regina Ombam, says the Country has over the years relied on donor funding.

Ombam said that there was urgent need to increase domestic funding so as to main the standards set even as donors pull out.

“Donor funding has dropped from 90 to 60 percent and we are happy that the Government has taken over the balance of 40 percent but there is need to increase this,” she said.

Ombam noted that in the coming days the Country could stop getting grants from donors and would be required to seek loans to sustain the fight against HIV Aids.

Ombam was speaking in Lake Naivasha Resort during a Capacity Building workshop for Kiambu County officials on health governance and financing.

She praised Counties for allocating sizeable funds towards health adding that they have already trained officials from Homa Bay and Kiambu Counties on health governance and financing.

“Counties should now focus on prevention campaigns as treating the disease is more expensive and requires the support of the National Government and donors,” she said.

Professor Sylvia Ojoo from Georgetown University said that they had already established the needs of residents of Homa Bay and Kiambu Counties under the health governance project.

Ojoo said that they were working closely with boda boda operators, the youth and fisher-folk in Homa Bay in reducing the high HIV prevalence which currently is among the top in the Country.

“We have over 40,000 boda boda operators in Homa Bay and we are reaching out to them through their organizations while in Kiambu we are using the church to get the high number of students,” she said.

Kiambu County Aids Coordinator Josphat Maina attributed the cases of HIV Aids in the County to drug and alcohol abuse.

“The most affected persons by HIV Aids in Kiambu are the young ones aged between 15-24 years and we are working with other agencies in terms of prevention,” he said.

Breakthrough as Ohangla star, Lady Maureen is taken in by family after mother´s rejection

At last, Ohangla singer, Lady Maureen has found solace in her maternal cousin´s home after her mother did not want anything to do with the singer.

Fredrick Odhiambo, Lady Maureen´s maternal cousin is said to have picked her up from Jaramogi Oginga Odinga Teaching and Referral Hospital after news of her homelessness reached him.

She is family and this is the time she needs us more than ever. 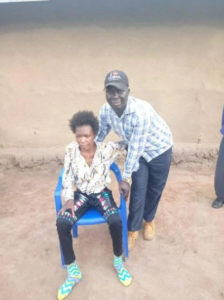 Fred, who resides at Pap Onditi, Kisumu revealed that the popular musician heaved a sigh of relief after he came to her rescue.

However, Fred divulged that Maureen´s mother had called him and warned him against helping the recuperating singer.

All in all, he aired:

We are all glad that Lady Maureen is here with us and plans are already underway to have a house built for her so she can have a place of her own. 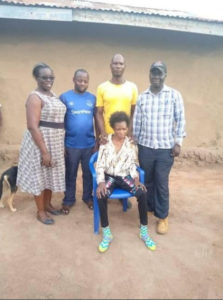 Lady Maureen with family and friends

Kenyan philanthropist and business woman, Akothee is the reason why Lady Maureen has been able to recover after rushing her to the teaching and referral hospital for medical attention.

Not that Maureen is out of the facility, Akothee has revealed that her uncle will be giving her land, to build a home of her own.

Had communication with MOURINEs Family ,and she is at her uncles place, who has accepted to give her a piece of land to build a home for her/ mother , my mother will be going to PAP ONDITI ON OUR BEHALF to tell us what’s on the ground 🙏🏾🙏🏾, my health is not like before that I could jump left right 💪, 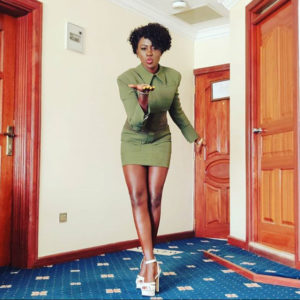 Further announcing that a fundraiser will be done to assist the singer with her various needs.

can we schedule our fundraiser for LADY MOURINE FROM 9.00 PM TOMMOROW NIGHT ?
I will drop the flayer at 9.00 pm Thursday , and let it run until Monday, 10,00 am , and announce, or post how much was collected. It’s a one off collection to avoid mischief and people coming up with stories, SUPPORT A WOMAN AND SAVE THE VILLAGE.
We are doing this as #teamakothee #teampositivity

Despite her affluence, the black beauty admitted she cannot give the Ohangla singer any properties because they are not related.

I could give land to her too, but I am not her relative, and no one will be there to take care of her ,so she is safe amidst her relatives💪💪 Be blessed as we look forward to support a woman 🙏🏾🙏🏾

Identifying himself as a close friend to Maureen, Hon Mike Peter Sirkal disclosed on Facebook, that a paybill number had been put up, to be able to support Lady Maureen before she fully gets back on her two feet.

We have acquired a pay bill number to help lady settle her life as an outpatient. As we speak, lady is in pap Onditi Nyakach. 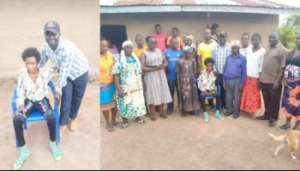 Lady Maureen with family and friends

The Queen of Ohangla was discharged from the hospital on Thursday, the 20th of February but remained stranded until Tuesday, the 25th of February (5 days later) when her cousin picked her up.

Funding for the fight against HIV Aids has reduced says NACC

Breakthrough as Ohangla star, Lady Maureen is taken in by family after mother´s rejection

The Lustful Girl Who Turns Out to be Someone’s Wife