Calls for transfer or removal of Lands ministry human resource head Janerose Karanja have intensified after her name was cited in several corruption allegations.

Karanja who is said to be a sister of former Interior principal secretary Karanja Kibicho, is alleged to have overseen the employment of about 300 casuals irregularly at the end of president Uhuru Kenyatt’s tenure.

Karanja has been further accused of using her proxies in the ministry to illegally get bribes from the casuals for their retention where each one of them is asked to give Sh2,000 for their retention at work. A source at the ministry who sought anonymity as she is not allowed to speak to the media confided that those who refuse to part with the bribe are warned of dismissal from their casual work.

“Madam is very powerful here and brags that she can’t be transferred because Public Service Commission chairman Anthony Muchiri has a lot of trust in her,” said one of the workers at Ardhi House. Other departments that Karanja is believed to have her people and who may be involved in corruption practices are procurement and accounts.

In these departments it is believed that their heads continue to receive kickbacks in order to approve payment to suppliers or authorize suppliers to supply goods and services in the ministry.

Karanja is said to have been close to former Lands cabinet secretary Farida Karoney and during Karoney’s time at the ministry, she oversaw the recruitment of Kikuyu and Kalenjin tribespeople at Ardhi House with many of them turning out to be corrupt. 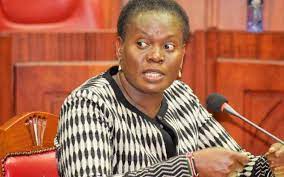 At the time many complaints were, according to some workers, raised by a number of them and registered in the HR office but were turned down as Karanja allegedly shielded them.

For now, workers at the Ardhi House hope that the new CS Zackaria Njeru Mwangi and PS Nixon Korir will effect changes and ensure that the ministry stops being seen as a corrupt one to a service delivery one.

Directorate of Criminal Investigations boss Mohamed Amin and the Ethics and Anti-Corruption Commission CEO Twalib Mbarak have also been called to join in and investigate numerous allegations of corruption at the Ardhi House that keeps on tainting the image of the ministry and slowing down the delivery of services to Kenyans.