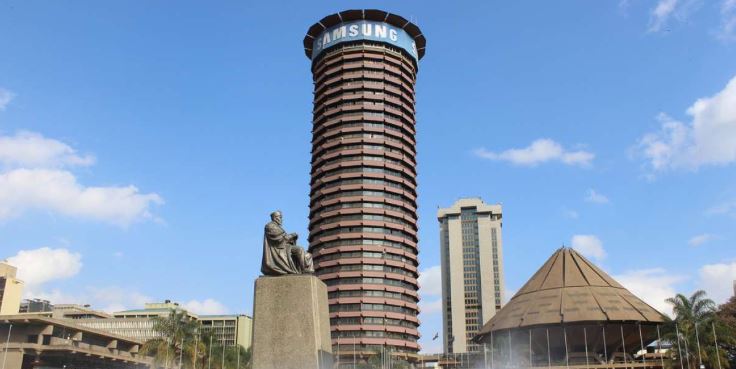 The High Court has established that the statue of Mzee Jomo Kenyatta is about 80 metres away from the Kenyatta International Conference Centre (KICC) tower.

In a case challenging the inclusion of the statue in Kenya’s new currency, it emerged that the Kenyatta statue was unveiled a day after KICC was opened. A three-judge bench who visited the site on Thursday afternoon.

The then Vice President Daniel arap Moi unveiled the statue a day after the late Jomo Kenyatta opened the convention centre on September 10, 1973.

Activist Okiya Omtata filed a petition in the High Court against the inclusion of Kenyatta’s statue on the new generation currency notes.

Use of individual portraits in currency notes and coins

Omtata accused the Central Bank of Kenya (CBK) and its governor, Patrick Njoroge, of violating Article 231(4) of the 2010 Constitution that prohibits the use of individual portraits in currency notes and coins.

“Notes and coins issued by the Central Bank of Kenya may bear images that depict or symbolize Kenya or an aspect of Kenya but shall not bear the portrait of any individual,” states the Constitution.

Article 231. (2) states that the Central Bank of Kenya shall be responsible for formulating monetary policy, promoting price stability, issuing currency and performing other functions conferred on it by an Act of Parliament.

Omtata’s case seems to be anchored on (3) which states: “The Central Bank of Kenya shall not be under the direction or control of any person or authority in the exercise of its powers or in the performance of its functions.”

Statue is part of the KICC complex

In response, the CBK and the attorney general have argued that the said statue is part of the KICC complex since they both stand on the same parcel of land.

In the argument presented before Justices Kanyi Kimondo, Anthony Mrima, and Arsenath Ongeri, the CBK said the distance between the two structures does not matter.

Through its lawyer Ochieng Oduol, CBK further added that the image was considered and approved by the Cabinet and that there was adequate consultation before new generation currency notes were printed.

The activist also criticized the CBK for conflicting with Section 34 of the Sixth Schedule to the Constitution by instructing that all the old Sh1,000 notes be withdrawn by October 1.

The judges will deliver their ruling on September 27.