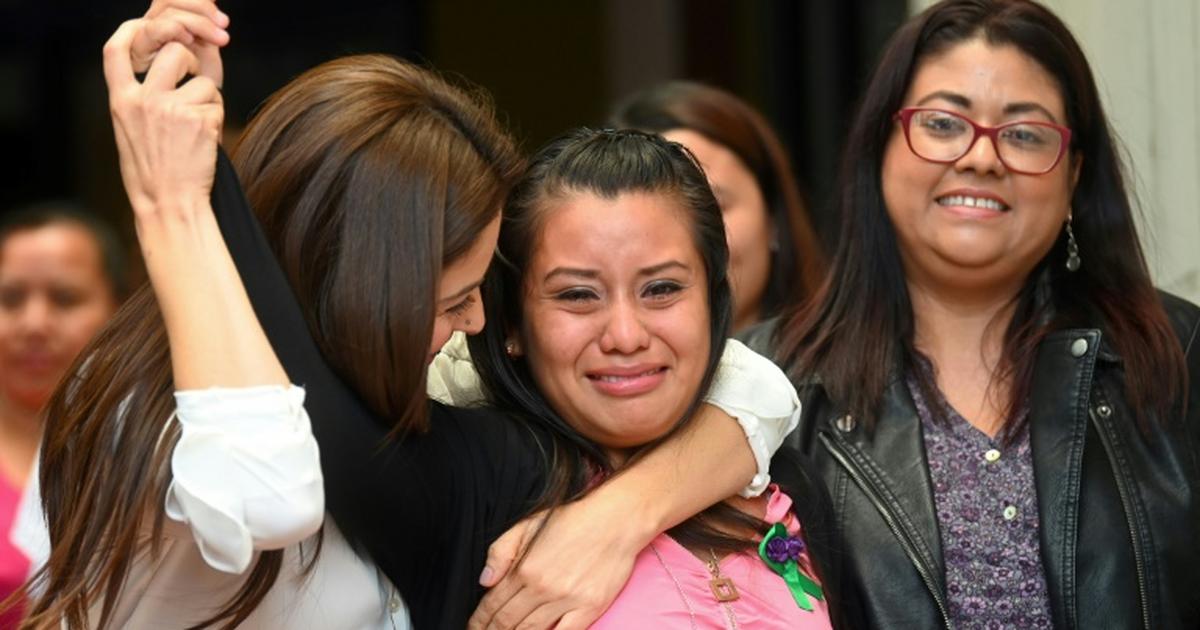 The court in San Salvador overturned a 30-year sentence imposed on Evelyn Hernandez, who was convicted under the Central American country’s strict anti-abortion laws in 2017.

“Thank God, justice has been done,” Hernandez said as she thanked her supporters from the steps of the courthouse in San Salvador’s northeastern Ciudad Delgado district.

The 21-year-old, who served 33 months of her original sentence, said “it was hard the whole time I was inside.”

“My future is to continue studying and to move forward with my goals. I am happy,” she said.

Hernandez’s legal team had secured a retrial after appealing the 2017 verdict on the grounds that it had failed to take into account key forensic evidence indicating that the baby had choked in the womb.

The month-long retrial concluded last Friday, with prosecutors requesting a 40-year sentence. They now have 10 days to appeal the verdict.

Amnesty International welcomed the verdict as a “resounding victory for the rights of women in El Salvador.”

“It reaffirms that no woman should be wrongly accused of homicide for the simple fact of suffering an obstetric emergency,” the rights group said.

El Salvador should “end the shameful and discriminatory practice of criminalizing women once and for all by immediately revoking the nation’s draconian anti-abortion laws,” Amnesty’s Americas director Erika Guevara-Rosas said.

Hernandez gave birth in April 2016 in the bathroom of her home in the central Cuscatlan region. She was 18 years old and eight months pregnant.

She said her son was stillborn but a court in the city of Cojutepeque convicted her of murder after prosecutors said she was culpable for not having sought prenatal care.

Hernandez said she had not known she was pregnant and gave birth on the toilet after feeling abdominal pains.

Hernandez became pregnant as a result of a rape that she did not report out of fear because her family had been threatened.

Deleon told reporters that Judge Jose Jurado Martinez said in his ruling “that there was no way to prove a crime and that’s why he acquitted. He said it had been a complicated delivery.”

Earlier, Deleon tweeted that although she was “bursting with happiness,” the fight would go on “because there are still women who have been prosecuted and who need justice.”

A January report by the Inter-American Commission on Human Rights urged El Salvador to revise the cases of women sent to prison for having abortions.

El Salvador should “carefully review the convictions” of each of the women, the report concluded.

President Nayib Bukele, who took office in June, has pledged to improve the human rights situation in his country.

In March, three women serving 30-year sentences for aggravated homicide after losing their babies by miscarriage were released from prison.

But around 20 women remain locked up in similar cases, serving long sentences.

Many women who suffered miscarriages or complications in pregnancy ended up being found guilty of voluntary abortions, the rights commission said.

El Salvador’s law against abortions provided for prison sentences of between two and eight years, but courts often found the women guilty of the more serious crime of aggravated homicide, which carries punishment of up to 50 years behind bars.

Harambee Starlets head coach David Ouma says he will use the Turkish Women Cup to prepare his team for the African Women Cup of Nations qualifier match against Tanzania.

The team has been training at the Camp Toyoyo grounds in Nairobi and is expected to leave the country for Turkey on Monday next week.

With only two days left before the Turkish Women Cup kick-off, Harambee starlets head coach has expressed his confidence that the team will deliver positive results. They will Northern Ireland in their first match of the Competition on Wednesday next week.

The team will conclude its preparations by participating in a mini tournament at Ongata Rongai on Saturday.

This will be the second time the team has earned an invitation to play in Europe after their 2016 International soccer tournament outing in Spain where they finished an impressive fourth. Other countries expected to compete in the tournament include; Hungary, Venezuela, Hong Kong and Romania.

The team which only consists of local players will be looking forward to securing themselves a position in the squad that will feature in the Africa women’s Nations Cup qualifier matches.

The final squad of 21 players will be named before the team jets out to Turkey on Monday.

Mother-in-Law From Hell! Kenyan Woman Narrates How Her Mother-in-law Pooped At Her Door Step

Mother-in-laws are said to be cold-hearted, unkind, unwelcoming, cruel, strict, abusive and even crooked creatures from hell. Most of them are the kind of species you’ll never want to interact with on this earth. They make their daughter-in-laws’ lives miserable and if you thought the many sad tales you’ve heard about them are wrong, wait until you read the story I’m about to write.

There are some who are good (30%) but the rest (70%) are devils. From mistreating, torturing and being abusive to their daughter-in-laws, mother-in-laws are the reason why many marriages don’t last for long. She will turn you into a slave, gossip mate and use you to harm/hurt others, woe unto you if you fail to abide by her rules.

Well, a Kenyan woman has left many shocked after she revealed the worst things her mother-in-law has ever done to her.

The woman is a mother of three adorable boys, but her mother-in-law is not happy with her. She is still following the old traditions where one was expected to give birth to children of both genders or else, one was excommunicated or forced to ‘marry a younger woman who would bear her husband children’ so as to please the community.

This woman revealed that her mother-in-law has been mistreating her and calling her all sorts of names just because she doesn’t have a female child. The satanic mother-in-law recently pooped her doorstep and told her to wipe it using her hands because she “could not bear them a girl”.

“I have had enough of this world. I am a mOther of three boys. My mother-in-law has always insulted me because I don’t have a dAughter but this evening the worst has happened, she came and pooped at my doorstep and smeared some on the door and said “panguza hiyo sababu ulikataa kunizaa” (wipe that because you refused to bear us a daughter) and I believe that this is pure witChcraft. What should I do?’ wrote the stressful woman.

Ladies, have you encountered such mother-in-laws? How do you deal with them? Leave a comment in the comment box below.

Ladies and gentlemen, I know this is the news you have waiting for, for the longest time.

She is one of the coolest, calm, collected, and God-fearing pastors children around.

Pastor Muiru’s daughter is not as popular as Preacher Kanyari’s daughter or the Kiuna’s, as she has always kept away from the public eye, and that’s why little is known about her.

Unlike her counterparts who thrive on controversy, the innocent daughter of Pastor Muiru prefers spending time in her parents’ church or at the studio doing photoshoots.

Just like her mother, Princess is also sexy, beautiful, and charming.

Kenya Airways back at Treasury for Sh5b bailout : The Standard

Top researchers caught in toxic scandals over money and sex : The Standard

At this rate, we’ll soon have no country