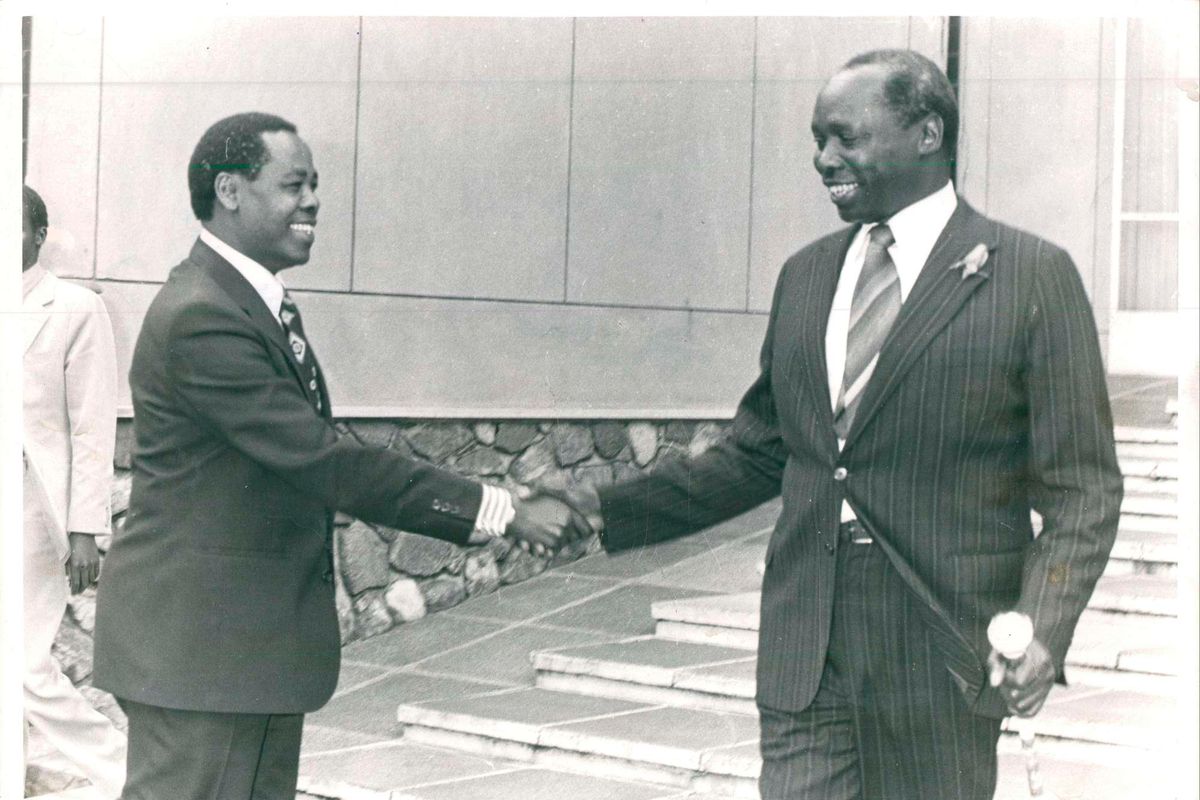 When former Attorney-General James Boro Karugu shared the resignation letter he wrote to then President Daniel arap Moi with this writer, it was not to be leaked during his lifetime. Like a silent man, he eschewed controversy and loved his peace.

When he died on Thursday aged 86, he passed on with some secrets of the meeting that saw him leave the public service at only 45. Silence gave him peace – and it was part of his survival tactic.

The Weekly Review can now reveal the contents of the letter that Karugu wrote to President Moi, known only by a few people and which provide a window to what transpired that day and the workings of the Nyayo regime.

We now know that on the afternoon of June 2, 1981, a day after the Madaraka Day holiday, Karugu was summoned to State House by President Moi, who was hardly three years in office.

When he arrived, Karugu found the President in the company of Jeremiah Kiereini, who was Chief Secretary, and Permanent Secretary in the Office of the President Simeon Nyachae – one of the most powerful people in the Moi government.

It was 3pm, and without the slightest hint, the bombshell was dropped: President Moi wanted Karugu to resign immediately.

From the letter’s contents, Karugu appears to have tried to salvage his career, but Moi was unwilling to discuss the matter. Either he was not interested, or the atmosphere was poisoned.

Back in his office, Karugu, perhaps shaken by the turn of events, drafted a terse, three-paragraph letter.

He said: “In strict compliance with your instructions today at State House Nairobi, at 3pm, in the presence of the Chief Secretary, Mr Kiereini, and the Permanent Secretary, Mr Nyachae, to resign, I hereby submit my resignation, effective immediately as directed by your Excellency.

“Not unnaturally, I would have been most obliged if specific allegations – if there are any – had been revealed to me and perhaps an opportunity given to me to explain. However, Mr President as you indicated that you did not wish to discuss the matter, I must respect that decision and your wisdom in the matter.”

“I take this opportunity to thank you, Mr President for giving me the privilege to serve you, your government, and my country. This, I have done with complete dedication, loyalty and honesty as I have done in the past for the last nearly 18 years in the public service. My conscience is clear.”

At only 45, Karugu had been asked to leave – and he left his Nairobi office and retreated to his Kiamara Coffee Farm on the outskirts of Kiambu town.

Here, he decided to lie low on the small plantation.

Karugu’s resignation took everyone by surprise. Known to be fiercely independent and a stickler for the rule of law, he was hardly 15 months as AG when he resigned.

In 2018, and in the only interview he conducted after leaving office, I had pressed him for the fine details of the falling-out with President Moi, but it appeared that the memories of the event still bothered him.

“Let us put it this way,” he said. “There were frustrations and issues that I could not push forward”. After promising to get me the details at an opportune time, the “details” came later with a caveat.

As President Moi started the crackdown on his critics, Karugu appears to have become a stumbling block – thanks to his integrity as a stickler for details. But, unfortunately, Moi was pretty vindictive and vicious. So why didn’t he look for another job?

The year 1981 marked the launch of Moi’s dictatorship. He had started a crackdown on his critics and reintroduced detention without trial.

It is only claimed that the AG resigned after failing to prosecute Nairobi businessman Andrew Muthemba, who had been accused of plotting to overthrow President Moi.

Sharad Rao, who was the Deputy Public Prosecutor, says indeed, Karugu resigned over the Muthemba case.

“He and I had been summoned to State House by President Moi. The President wanted to know our view on whether Muthemba should be charged for treason. I told him that what Muthemba was accused of was technically treason (and) it was difficult to prove it, and in any case (it) was not so serious as to warrant a charge of treason.”

According to Rao, he suggested during the meeting that they should charge Muthemba with sedition.

“Karugu disagreed and insisted that we should charge him with treason and was confident that it would succeed.”

“What if it doesn’t?” asked President Moi.

According to Rao, “If it doesn’t, Karugu said he would resign. At the President’s insistence, I was asked to prosecute. The case failed and Karugu, true to his word, drove up to State House and handed his resignation. That was the reason he resigned.”

Rao’s view confirms that Karugu never shared with his close associates the story about the State House summons.

Muthemba, who was the cousin of Charles Njonjo, Karugu’s predecessor in the AG’s office, had, according to the court records, approached Njonjo with alarming information that there were people trying to buy arms to overthrow the government.

Njonjo told him to report his story to the police. Officers from the Criminal Investigations Department arrested Muthemba and he was charged with attempting to procure weapons from the military.

According to Karugu – as he later told the 1983 Njonjo Commission of Inquiry – Njonjo would also have prosecuted Muthemba had he been at the law office.

But it appears that there was some bad blood between Karugu and Njonjo, a close ally of Kiereini’s who was present at State House meeting.

After taking over from Njonjo – who resigned in 1979 to join politics – Karugu had not been in office for long before he faced the controversial case in which a US sailor, Frank Sundstrom, had killed a Kenyan call girl, Monica Njeri, in Mombasa.

After pleading guilty, the sailor was set free on an Sh500 bond, eliciting a major public outcry.

Coming at a time when President Moi was building his ties with the White House, Karugu confessed to a hostile Parliament that the case had put him in a predicament and conceded that he was not satisfied that justice had been done.

While that was interpreted as an attack on the Judiciary, he told Parliament that this was “the price we have to pay for the independence of the Judiciary”.

Having first graduated in history and political science from Ohio State University before proceeding to London for a law degree, Karugu had returned to Kenya to work at the State Law office.

He was a familiar name in the 1970s, when he was the Deputy Public Prosecutor until April 1980, when he was appointed AG.

It was while he was at the prosecution office that Cabinet Minister Tom Mboya was assassinated, and the hunt for the killer led to the arrest of Nahashon Isaac Njenga Njoroge.

This was the first case he wanted to prosecute but his senior, Clive Brookes, decided against it. “I wish I had the Mboya case,” Karugu said. “There was no way we were going to lose this case.”

Another case that was dear to him was the 1970 coup plot against Kenya’s first President, Jomo Kenyatta, in which Chief Justice Kitili Mwendwa and army commander Brigadier Joseph Ndolo were implicated.

Others were then Yatta MP Gideon Mutiso and Makerere don Prof Ouma Muga.

“This was a very big case, and the focus turned to me. Had I lost that case, Mzee (Kenyatta) would not have forgiven me,” he said.

Upon his appointment as AG, Karugu’s main worry was that corruption was creeping into the Judiciary.

More so, there were efforts to dilute the powers of the Attorney-General after Njonjo convinced Moi to create a new Ministry of Constitutional Affairs. During the Njonjo Commission, Karugu said that Njonjo had hoped that he would be a ‘Yes’ man.

“Njonjo left the office with some misconceptions or preconceived ideas that I was going to let him have the easy way in the Office of the Attorney-General if I was appointed, [that] I would sit back and let the office be emasculated, so the powers go to a constitutional office of Minister for Justice. Hence my resistance to those overtures was both treacherous and perfidious,” he told the Commission.

Whether that refusal precipitated his fall might never be known. But as he left office, he picked a mantra that informed his life outside the government: “I don’t have to be corrupt, and I can earn money by farming.”

On the afternoon he resigned, he took his wife and children to the farm in Kiambu to make what he called an honest living.

“I am lucky my children grew up knowing the joy of hard work,” he said.

In the short period he was in office, he distinguished himself as an AG who served with great professionalism.

But it was his silence in the noisy political landscape that has always baffled people.

That silence, it is now clear, is where Karugu hid his secrets.