The 2020 best original song Oscars are up and the nominee list is out. Among them being ¨I´m Standing With You¨ by Diane Warren and Kenya´s own, Rachel Mbuki Marete among other performers.

Diane Warren wrote the music and lyrics to  the song for the movie ´Breakthrough´. This marks her 11th career Oscar nomination as a songwriter.

Former Miss Kenya-Miss Universe Pageant, Rachel Mbuki Marete is among the lyric adapters of the song and it sure is overwhelming for her.

In a long post on social media, the enchanting model expressed:

I am so humbled and grateful to have been a part of this incredible song written by the legendary @warren_diane that has earned her an 11th Oscar nomination!

Being able to work with Diane and @johndebney was simply a dream come true.

A song, embraced as a powerful anthem among women globally – holding hands and standing firm together, against domestic violence.

…this just makes it an all around unbelievable experience.

I am grateful for the opportunity to represent Africa and Swahili speakers in this masterpiece. Diane deserves to win this Oscar. Special thanks to Valeria Altobelli and her amazing organization @mission.org_official for spear heading this incredible international movement.

Rachel stars as one of the few black women in the performance, therefore representing Africa big-time! To top it up, she sings her part in Swahili. 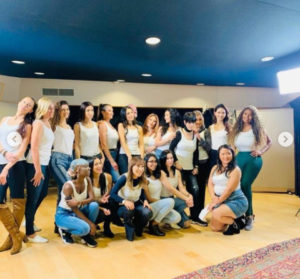 The Kenyan-Tanzanian star was quite engulfed in the moment – gloriously singing her part and jelling sweetly with the Oscar award-winning songwriter, Diane.

The world famous writer, Diane, wrote the song and gave an opportunity to various women across the globe, to adapt the lyrics into their own languages.

Rachel adapted a part of the lyrics into Swahili, which she artistically brings out.

John Debney stands as a legendary composer famous for pieces like ´The Passion of Christ´ done alongside Mel Gibson, just to mention a few.

Here is a snippet of the International women´s performance….swipe left.