Great expectations as Brandon sails through in head boy post 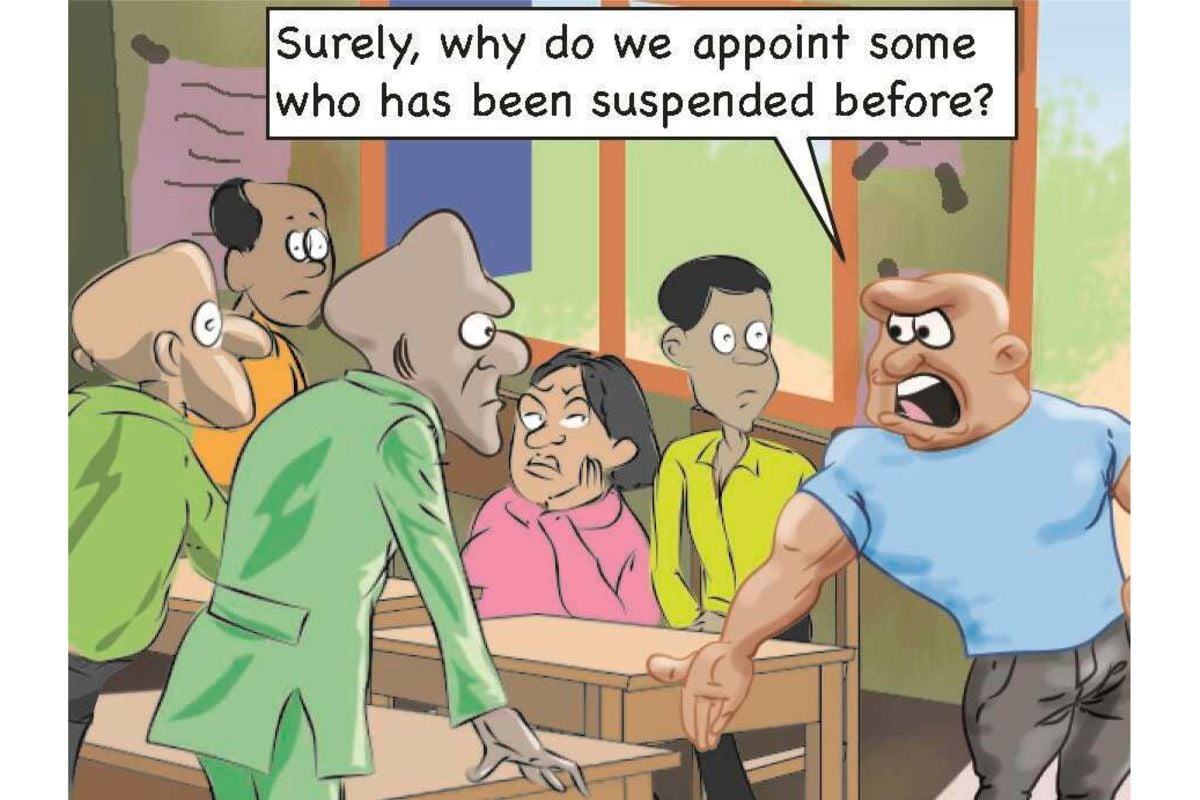 By the time of going to press last week, I had asked teachers to sleep over the matter of appointing Brandon, the boy I stay with, as the next head boy of Mwisho wa Lami Primary school.

If you remember, teachers in the staffroom had proposed him. While it would be good to see someone from my house head the school, I initially opposed this, but I was shown in black and white that if we did not appoint him, there was no one else we could make head boy.

“Brandon, with his weaknesses, is more mature and more exposed than others,” said Mrs Atika, Brandon’s biggest proponent.

Her daughter, Maryline, had also been nominated as sanitation prefect.

“Because someone who has been suspended before knows the difference between right and wrong,” said Lena, her terrible hair in tow.

Lenah’s son, Jason, had also been nominated as a class prefect.

Anyway, instead of teachers quietly sleeping over the matter, some teachers – let me call them enemies of development – went about talking about the matter to strangers. Particularly to people who have no idea how schools should be run.

This is what I found being discussed when I went to Hitler’s on Saturday for evening classes. It was Alphayo, Kuya’s great friend, who started it.

“Dre, why are we making the school a family affair?” he asked me. “I thought dynasties were defeated on August 9?”

“What do you mean by family affair or dynasty? Can you please elaborate?” I asked him.

Alphayo has never forgiven me ever since I removed him from the school BOM. He did everything to be returned but I was always a step ahead of him.

“You are the HM and you want to appoint your son Brandon as head boy, is that not turning the school into a family,” he asked.

“Appointing Brandon instead of who?” I asked him. He went on to say that there were so many children who could be appointed head boy. “This school has over 400 children. You can’t tell me only Brandon can be head boy, surely.”

“I agree; there are over 400 children. Since you know all of them, can you suggest just one who can be head boy? Just one!” I asked him.

Alphayo couldn’t utter a word. He instead went on to say that he had learnt that even Mrs Atika’s daughter and madam Ruth’s daughter were being considered.

“When you were the BOM chairman, and your grandson was a head boy, did you see any problem?” I asked him.

He said this was different.

“A BOM chair is different from HM. You know that well,” he said.

“This is our school and Mrs Atika and Madam Ruth come from this village,” said Nyayo. “Do you want us to appoint prefects from other villages?”

Nyayo’s son was also one of the prefects appointed.

“You are supporting this only because you sit in the BOM, don’t you?” said Alphayo. “The role of the BOM is to guide the HM how to run the school, not to just blindly support all the HM does, even when they are running the school down.”

“Are you opposing this because you were removed from BOM?” asked Nyayo. “And do you have any children in the school? Even among your grandchildren, is there any who can be a prefect?”

“What are you talking about, you fool?” asked Alphayo menacingly.

He raised his bakora, ready to hit Nyayo with it. It was only Hitler’s swift action that prevented Alphayo from hitting Nyayo.

“No more discussions of school matters here,” Hitler said. “If you have any issue with the school, go complain to the school or to education offices. You all come here for a different reason.”

We did not talk about school matters thereafter.

Knowing how important the matter was, I could not let it drag. On Monday morning, I called for a staffroom meeting at 11am for ratification of the nominated prefects. As you would expect, both Saphire and Kuya were not in school. There was no debate on the matter, and we unanimously ratified the list. We then called for a special parade.

“Every year, we go through a process of appointing young leaders who then serve as a bridge between the students and the school administration,” I started.

I went on: “This year, we are announcing the appointment of visionary boys and girls who will lead this school to the next level. Before I read out the names, I want to thank the previous prefects’ body for having been very cooperative and supporting the administration to run the school.”

The students clapped as different names were announced. But when Brandon was announced as head boy, there were loud cheers and celebrations from all the students. It was clear we had made a great choice that resonated well with the students.

We had a meeting with the new prefects that afternoon, during which we guided them on what was expected when they formally take office next January.

The next day, Kuya tried to bring up the matter. It was during tea break.

“I see you decided to sneak in your children as prefects when we had all agreed to go think about the matter,” he started.

“We did not sneak them in,” said Sella. “We had a staff meeting yesterday, during which we extensively deliberated the matter and made the decision.”

“How come there was no notice or invitation to the meeting?” he asked. “We are usually informed in advance of any such important meeting so that we can attend.”

“Instead of doing what? Why were you not in school yesterday?” asked Lena.

“You are not my boss; you have no right to ask me where I was,” he dismissed her.

He went on: “I can’t believe that we have appointed someone who had never even been a perfect as the head boy. Can a school sink lower than this?”

“You are free to seek a transfer if you don’t like it here,” said Alex. I left the staffroom before Kuya could respond to him.

Day I had a chat with the Pope