How different was this Madaraka Day celebration from last year 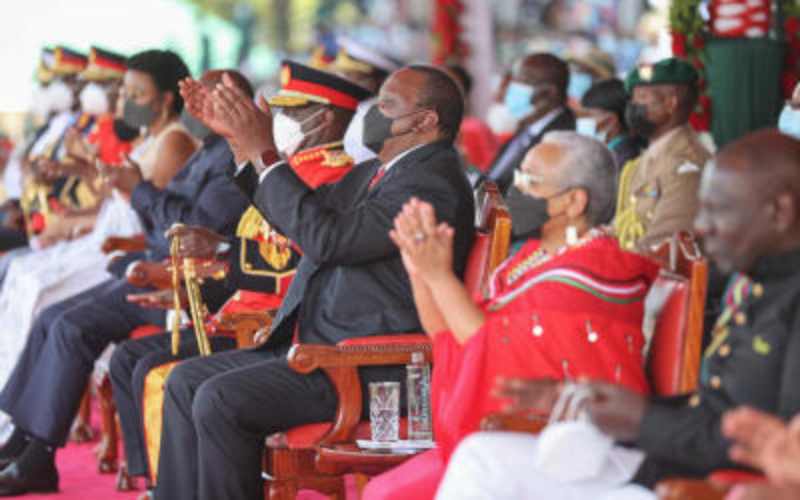 President Uhuru Kenyatta began his 57th Madaraka Day address by saying “For the first time in 57 years, we are unable to celebrate Madaraka Day at a public gathering because of the COVID-19 pandemic.  Instead, I will address you from State House,”.
There were no celebrations as Kenyans followed the president’s address on TV, Radio and Social media, from their homes.
In terms of the president’s address, his 2020 speech was mainly a reflection of the country’s progress since it attained self-rule.
Although a big chunk of his speech then was a reflection, the president spoke deeply about the pandemic, the country’s economy, and delved a bit into the BBI topic before issuing new Covid-19 guidelines.
On the other hand, the 58th Madaraka Day, the second since the Covid-19 pandemic struck, was celebrated in a close to normal manner.
This could be explained by the ongoing Covid-19 vaccination and the widespread awareness of the Covid-19 pandemic.
From congregating at the lakeside city to the launching of projects, renovation of Jomo Kenyatta International Stadium, a visit by Burundi president Evariste Ndayishimiye and the usual wild, charged and dramatic crowds of Kisumu.
There were stadium celebrations, stage performances, 3, 000 invited guests and a foreign president who was the chief guest of the celebrations as opposed to the previous year.
While addressing the country on June 1, 2021, the head of state started by appreciating Kisumu, the hosting county and celebrating diversity and then mentioned the doctrines of founders of the nation.
A large part of the speech today was based on national conversation and burden of choice, restoration of dignity and political stabilization all of which are linked to the Building Bridges Initiative (BBI).
“From nullification of a presidential election in 2017 to an attempt to stop the will of the people as expressed through BBI, the Judiciary has tested our constitutional limits, but not broken them,” President Uhuru remarked.
“The question the National Conversation should ask is; who carried the burden of this choice?  Was it the Judiciary or the people? it is the people who carried the burden of this choice,” he went on.
The president explained to the people why the proposed constitutional changes were a priority to him adding that it was a way for him to develop the country further.
“Ten years later, I am already discerning a constitutional moment.  Not a moment to replace the 2010 constitution but one to improve on it.  A moment that will right what we got wrong in 2010,” Uhuru said.

The head of state also pointed an accusing finger towards the judiciary and said “the growth of independent institutions has stretched the democracy”.
“When the Presidential election was nullified in 2017, we lost a trillion shillings as an economy in only 123 days. We were losing 1 billion shillings every working hour for the 123 days we held the 2017 election,” he said further.
Although the last two Madaraka Day celebrations were different talks that hinted at the role of the BBI dominated the president’s speech.
Last year, the president said that passing the proposed constitutional amendments in the BBI was his way of implementing the plan that the founding fathers of the nation initially had.
“If certain elements of the constitution outlive their historical purposes, they become cancer.  They must be removed or they will infect the good elements of the mother law,” he said from the statehouse during the 2020 Madaraka fete.
Madaraka Day is celebrated every first day of the sixth month of the year to commemorate the day Kenya got self-governance.

Tracking and monitoring motor vehicles is not new to Kenyans. Competition to install affordable tracking devices is fierce but essential for fleet managers who receive reports online and track vehicles from the comfort of their desk.