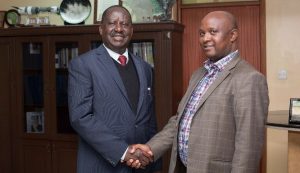 Vihiga High Court judge Joseph Karanja dismissed the case with costs, ruling that the petitioner, Babira Ndeda, had no substantial evidence to enable the case proceed to hearing.

The court ruled that the petitioner failed to comply with the legitimate procedures while filing the case.

Osotsi while reacting on the ruling, said he knew the case would not go anywhere because it lacked merit and substantial evidence to advance to any logical hearing stage.

“I was not worried because I knew the case will die on the way. When I looked at the case, it lacked merit, and that is why the High Court has dismissed it,” said Osotsi.

Osotsi’s supporters celebrated the court’s verdict saying it will enable him to focus on his work as a senator and serve Vihiga electorates.

Osotsi’s lawyer Jackson Awele said the petition challenging his client’s victory was struck out for failing to meet the threshold.

He said the petition filed by Ndeda on September 8 2022 challenging Osotsi’s election failed to meet the requirements as per the court statutes.

“Once you file a court case relating to elections, you have to pay security cost within 10 days of which Ndeda’s team failed to do on time,” Awele said.

Awele said if the petitioner fails to pay security fee then, the case will not have any future in court.

He further said the petitioner failed to serve Osotsi’s office with court case documents on time.

“We were served with those documents on September 27, in 2022 after we had forced them to do so,” Awele said.

“Once someone files a case against you, he or she has to serve you as a respondent with those court documents within the required timeframe to give you room for preparation, something they did failed to do,” he cited.

Awele said they only learned about the case via the media which is against the law. In the case, Independent Electoral and Boundaries Commission and Vihiga county returning officer Peter Tiyo were listed as the first and second respondents while Osotsi was listed as the third respondent.

Lady To Head Daily Nation In New Changes At NMG