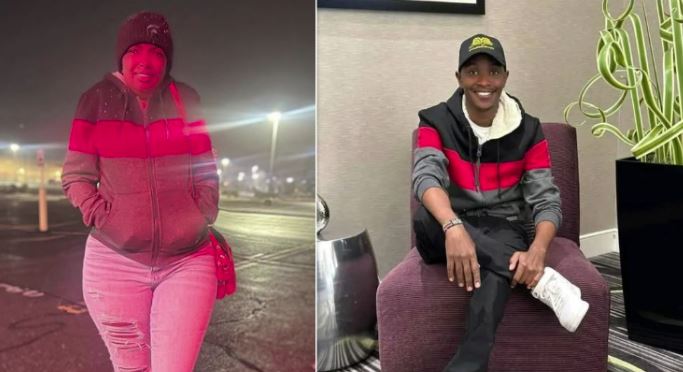 Karen Nyamu wearing Samidoh’s jacket during her visit to America

Nominated Senator Karen Nyamu on November 16, 2022, uploaded a photo of herself in the United States of America, where she had gone to visit her married lover, vernacular singer, Samidoh, born Samuel Muchoki.

In the photo, she was wearing Samidoh’s tracksuit jacket and his marvin hat to protect herself from the winter cold currently being experienced in America.

Nairobi News previously reported that Nyamu had flown to the United States of America to join Samidoh, the father of two of her three children, in Los Angeles, California, where he currently is for his 2022 Mugithi Tour.

Nyamu has been Samidoh’s mistress for about three years now and has been in constant online fights with his wife of 12 years, Edday Nderitu.

Nairobi News also previously reported that former Nairobi governor Mike Mbuvi Sonko bragged about introducing Nyamu to Samidoh and was the glue that brought them together in a relationship outside his marriage.

Sonko was among a handful of politicians who cheered on Karen Nyamu as she celebrated being with Samidoh in America.

“Didn’t I tell you to run there (to America) to your man? The winter season is upon them, and the cold is too much that ice cubes are also falling.

Someone cannot sleep alone in bed. You can even see that your man karibu adandiwe (almost left us),” said Sonko alluding to a recent, unspecified incident in which Samidoh was rushed to an emergency room at an American hospital.

Also read: Vitu za ujinga! Samidoh claps back at fan asking him to chose between Karen Nyamu and Edday

“I don’t get out of bed when the temperature is lower than my age…enjoy sweetheart,” added Honorable Joyce Korir, the former Bomet woman representative.

Samidoh is currently on a two-month USA-United Kingdom- Qatar Mugithi Tour and is expected back in Kenya during Christmas.

Upon his departure, Nyamu took to Instagram to tell him that their children would miss him terribly and has since been posting videos of herself jamming to his songs.

Several Kenyans speculated that Karen Nyamu would probably return to Kenya carrying another of Samidoh’s babies, considering how fast she gave birth to the two children they shared in such a short amount of time.

Samidoh has three children with his wife, Edday.

Going for an internship? Here’s why you need personal accident cover