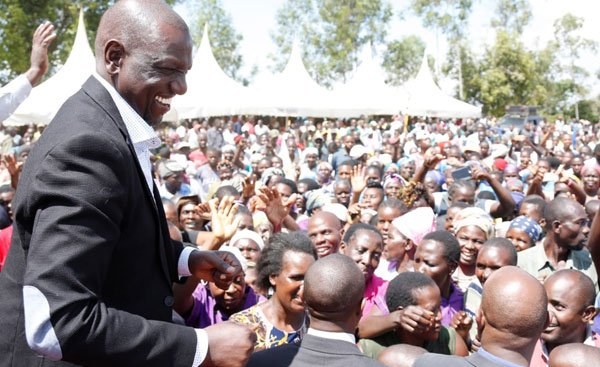 A day after being on the receiving end during the Building Bridges Initiative rally in Kakamega that ended up as a show of might by President Kenyatta and ODM leader Raila Odinga, Deputy President William Ruto on Sunday fought back, dismissing the meeting as mere “drama”.

Cautioning against being targeted for attack, Mr Ruto wondered why his name was on the lips of nearly every speaker at the rally that was also attended by Amani National Congress leader Musalia Mudavadi and his Ford Kenya counterpart Moses Wetang’ula.

Mr Ruto dismissed the meetings that have been held in Kisii and Kakamega as “drama” and called for an inclusive programme to collect views from citizens in every sub-county.

Speaking at St Christopher Catholic Church in Kyumvi, Machakos County, the DP urged the BBI team to come up with sub-county programmes where Kenyans can give views on where the country is going.

“I urge leaders who are chest-thumping, promoting divisive politics and the hullabaloo surrounding BBI to form a separate forum since calling Ruto names and mentioning Sugoi will not be included in the report,” Mr Ruto said.

Mr Odinga has been spearheading the drive that has so far been conducted in Nyanza (Kisii) and Western (Kakamega), with Coast (Mombasa) as the next stop.

The squatter issue, landlessness, poverty and closure of businesses due to ferrying of goods on the Standard Gauge Railway are expected to dominate the Mombasa rally.

The hope is that the BBI report will address issuance of title deeds to Coast residents who live on land that has been surveyed but not registered in their names.

The coastal people also demand waiver of registration and other costs to enable the poorest of the poor to get their title deeds.

They have also called for a fund to provide for the compensation of all those who have been victims of historical injustices.

Even though all the political players have agreed to support the BBI drive, suspicion continues to dog the process of publicising the report with some leaders allied to Mr Ruto accusing Mr Odinga’s ODM party of hijacking the process.

They expressed fears that Mr Odinga and his team are out to polarise the country with their incessant attacks on the DP instead of discussing the contents of the BBI report.

“What happened on Saturday at Bukhungu stadium was extremely embarrassing and sad; instead of addressing the contents of the draft and preaching peace, they preached political enmity and fought one individual,” Mr Serem said.

Mr Cherargei claimed the ODM brigade was using the BBI report to tarnish the DP’s name.

On Sunday, organisers of the Mumias meeting that was to coincide with the BBI rally in Kakamega asked Mr Mudavadi and Mr Wetang’ula to apologise to the people of western Kenya.

Former Kakamega Senator Boni Khalwale and former Cabinet Secretary Rashid Echesa said it was wrong for the two senior-most leaders from the region to attend the Bukhungu rally.

Dr Khalwale said that by skipping a rally they had initiated, Mr Mudavadi and Mr Wetang’ula had betrayed the trust and confidence of the people of western.

The two made an about-turn and attended the BBI event, where their differences with allies of President Kenyatta and Mr Odinga were clearly evident.

Leader after leader who addressed the rally targeted the two, as well as Mr Ruto, over their alleged indecision on the BBI.

The message was clear — shape up or ship out — but Mr Mudavadi and Mr Wetang’ula would hear none of it.

Mr Wetang’ula called for unity of purpose, noting that it won’t be unity if some people are “seated on the table eating while others are outside”.

Vocal Cherangany MP Joshua Kutuny said BBI was the Jubilee government’s agenda to unite the country, adding that Kenyans have no option but to support it, “because President Kenyatta and Mr Odinga seek to unite the country through it. So you either support it or stay away, but it’s a tsunami that will even bring down mountains,” Mr Kutuny warned.

He added: “If you are not in BBI and ‘handshake’, then expect tough political times ahead.”

“BBI is unstoppable and any leader who opposes it will fail,” Mr Salat said.

Cotu Secretary-General Francis Atwoli and Makadara MP George Aladwa warned that continued indecision by some western Kenya leaders on the BBI would jeopardise their political careers.

Kenya: Ruto Says BBI Meetings Have Been Turned Into Drama