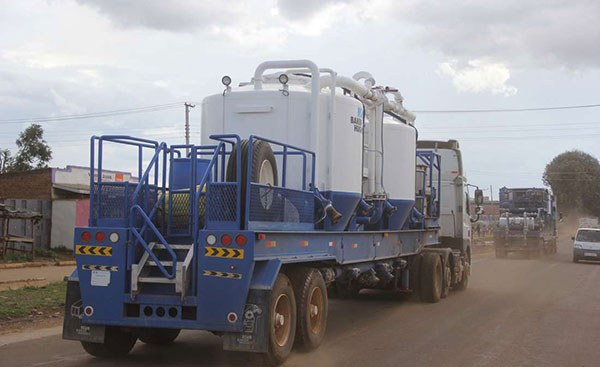 Tullow Oil, the British firm exploring oil in Turkana, is in deep trouble abroad, which may put Kenya’s oil wealth dreams in jeopardy.

The company’s troubles come after its decision to downgrade its production outlook, and the exits of the company’s chief executive and exploration director.

The problems affecting the firm are expected to affect its operations worldwide.

The share price of the London listed firm went on a free fall, cutting its market value by over Sh130 billion after its shares crashed by 72 per cent to 70 pounds, a 16-year low.

On Tuesday, Tullow revealed it was open to receiving offers to be bought “at the proper value”. It also scrapped its dividend, making a bad situation worse, in what will make it harder to raise the billions it needs to continue with exploration.

It has been a bad year for Tullow that started with technical difficulties in Ghana, its projects in Uganda and Kenya have faced delays and results from its wells in Guyana have been below expectations.

However, it is a weak performance by its flagship assets in Ghana that appears to have turned its fortunes upside down.

“The board has, however, been disappointed by the performance of Tullow’s business and now needs time to complete its thorough review of operations,” she said.

The firm has also slashed its capital expenditure and cut costs at its operating fields, decisions that are likely to affect Kenya, where it is still having problems with locking down a final investment decision.

“In light of these new production forecasts, there will be a thorough reassessment of the Group’s cost base and future investment plans in order to allocate appropriate capital to the Group’s core production assets, development projects and continued exploration,” it noted.

Given that Kenya is not one of its most important oilfields, any cuts in exploration activities are likely to be felt here in Nairobi and in the Turkana oilfields.

However, Kenya has downplayed Tullow Oil’s problems abroad, saying, they are a “non-issue” here with Petroleum Principal Secretary Andrew Kamau saying the country has nothing to worry about.

“We’re not in Ghana and this is a non-issue. Do your own research and do not just take my word for it. What happens in Ghana may not affect us,” Mr Kamau said.

Kenya completed its first shipment of the controversial early oil pilot scheme with 200,000 barrels of crude oil sold to a Chinese company for Sh1.2 billion.

Tullow says it has invested more than Sh300 billion in Kenya and hopes to make the first commercial sale in 2022.

Given the fact that exploration is a capital-intensive exercise, investors need to be assured that there are future prospects in a company before they pump in money.

As it is, Tullow will find it hard when it goes out to look for money to fund the expensive venture.

But of most urgent attention for the Kenya project is building of the 890-kilometre pipeline from Lokichar to Lamu, which is critical in making Kenya’s oil viable.

The firm will now be temporarily run by Ms Thompson, while Mark MacFarlane, who was East Africa Executive Vice-President is now chief operating officer.

Tullow said it would provide a full financial and operational updates on February 12 when it releases its full year results, with an update on progress to be given in the Group’s Trading Statement on January 15.

Production for the following three years is expected to average around 70,000 bopd.

Various factors had been identified that caused reduction in production guidance.

“On the Jubilee field, these factors include significantly reduced offtake of gas by the Ghana National Gas Company, which Tullow makes available at no cost and lower facility uptime,” it said.

Other factors cited include mechanical issues and there is faster-than-anticipated decline in one of its oilfields.

Kenya: Police on the Spot Over Attack on Pregnant Woman, Rider

Former Kakamega Senator Boni Khalwale and former Sports CS Rashid Achesa inspecting Nabongo grounds ahead of the planned today rally at the venue. [File, Standard]
Former Kakamega Senator Boni Khalwale could be humiliatingly on his own after leaders at Bukhungu Stadium confirmed that seats had been reserved for ANC leader Musalia Mudavadi and his Ford Kenya counterpart Moses Wetang’ula and the two are to attend the Building Bridges Initiative (BBI) meeting at Bukhungu Stadium, Kakamega.

Speaking to KTN at Bukhungu Stadium, a Ford Kenya party official confirmed that his party boss was on his way to the venue and that a seat had been reserved for him.
“I can confirm the two leaders will be here, as you can see there are seats reserved for both Wetang’ula and Mudavadi,” he said.
If the two attend, it would confirm Central Organisation of Trade Unions (Cotu) Secretary-General Francis Atwoli assertion that no leader in western has the muscle to take him head on.
SEE ALSO :Boni Khalwale roughed up in KibraThe two had said they were not consulted and that they would skip the meeting that was to be attended by ODM leader Raila Odinga.
Khalwale who visited the Nabongo Grounds in Mumias town had affirmed the meeting dubbed Wstern Economic Forum, would go on unopposed, stating that he had mobilised local leaders from Trans Nzoia, Bungoma and Kakamega Counties and Vihiga Counties.
He said Mudavadi and Wetang’ula would attend the Mumias meeting.
For More of This and Other Stories, Grab Your Copy of the Standard Newspaper.   Subscribe Now »
Western leaders have differed over the today’s BBI meeting with those allied to Deputy President William Ruto, Mudavadi and Wetang’ula terming it political.
Some claimed the meeting was to be used to endorse host Governor Wycliffe Oparanya as the community’s spokesperson.
SEE ALSO :Showdown looms as Big Two make about-turnThose in support of the BBI meeting chaired dismissed the allegations adding that the event was a BBI affair.
The meeting was mooted at another meeting held at Atwoli’s rural home in Kakamega.
Those opposed to the BBI meeting questioned Atwoli’s mandate to speak for the Western region.
Giving up
By today 11 am, Khalwale and other Tangatanga allied politicians were nowhere to be seen at the Nabango Grounds as police sealed off the venue.
Senate Majority Leader Kipchumba Murkomen has condemned the heavy police deployment, saying it shows clearly that BBI is not about uniting the country as claimed.
“Fellow Kenyans, BBI is the only way to end violence and politics of exclusion. We must create a nation of only one democratic idea. We’re uniting this country by force. We’ve deployed our officers to ensure that no other idea thrives, only BBI. Anyone defying will be dealt with ruthlessly,” he posted on his Twitter handle on Saturday.

By MOSES HAVYARIMANA
More by this Author

At least two constitutional experts and a legislative draftsperson nominated by each of the East African Community member states were expected at the consultation meeting on drafting the EAC political confederation constitution that kicked off in Ngozi province in Burundi last week.

After the committee of experts drafts the regional constitution, a Bill will be submitted to the Heads of State Summit for approval.

According to the chairperson of the committee, Benjamin Odoki, a draft constitution is expected in two years, in time for the proposed implementation of the confederation model by 2023.

The Political Federation—the pinnacle of the EAC Regional Integration—is the fourth step after the Customs Union, Common Market and Monetary Union.

Even as Burundi is hosting the five-day meeting, its sour relations with Rwanda came to the fore as Kigali did not send a representative, prompting President Pierre Nkurunziza’s deputy spokesman Alain Diomede Nzeyimana to tweet “President Pierre Nkurunziza believes that the idea of a “Political Federation” will not be easy to realise given the absence of Rwanda in the consultations.”

Commenting on Kigali’s absence, Rwanda’s EAC Minister Olivier Nduhungirehe said it would not hinder the process “since the absence of Burundi in EAC meeting hosted by Rwanda never impacted the EAC integration.”

Two Somali nationals are facing human trafficking after allegedly selling their compatriot to slavery in Libya.

They are accused of trafficking the female refugee by recruiting and transporting her for purposes of exploitation due to her position of vulnerability as a refugee – between November 2 last year and January 2 this year.

The victim is held by rebels in Libya who are demanding Sh1 million ransom from her family to free her.

The two suspects are also charged with unlawfully being present in Kenya. They lured the victim out of Hagdera refugee camp in Garissa and took to JKIA. She later flew to Khartoum from where she was transferred to Libya.

She later reached out to her mother through WhatsApp and informed the family of her predicament in mid-December last year.

The victim told the family that she was in detention with others and gave a mobile phone number of Mohamed who moved her to JKIA before on to take a flight to Khartoum before she found herself in in the Sudan capital. Afrah procured travel documents for the victim.

The case was reported at Shauri Moyo police station and the two suspects were arrested. The station later handed over the matter to Directorate of Criminal Investigations’ Transnational Organised Crimes Unit.

The two suspects were presented before Makadara law courts on Friday but could not plead to the charges because there was no Somali interpreter. They will be charged on Monday.

Rihanna and billionaire boyfriend Hassan Jameel rumored to have split

Give report to all Kenyans, team urged : The Standard