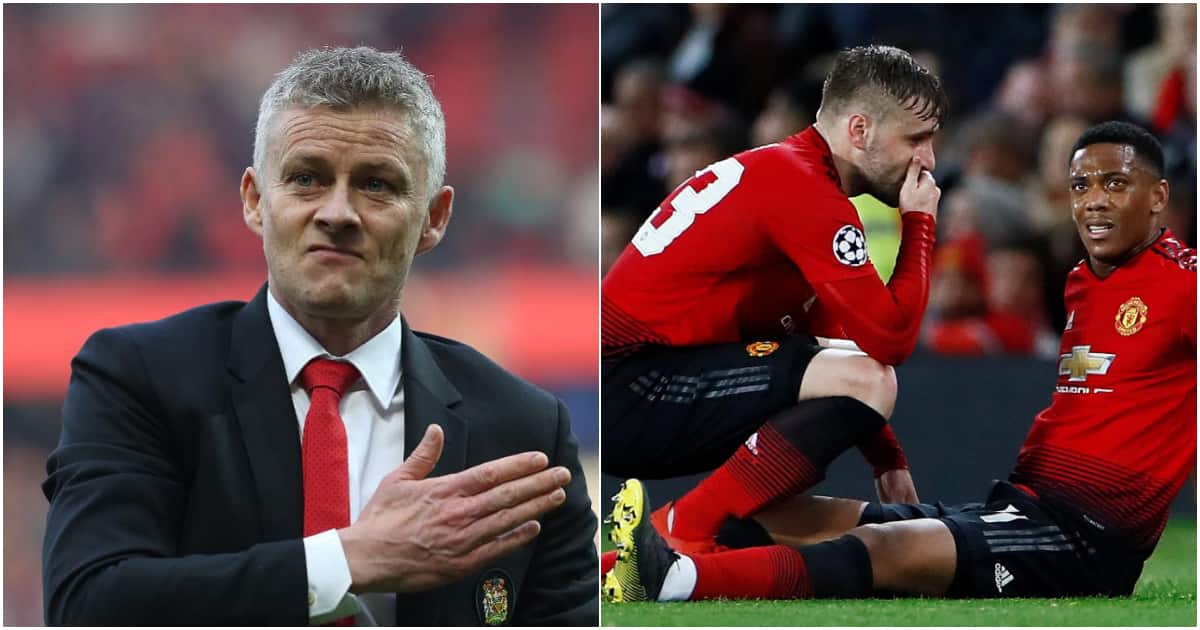 – The woeful form now has them sitting eighth on the log with just five points, seven behind leaders Liverpool

Man United are staring at a major injury crisis ahead of their Saturday, September 14, Premier League clash against Leicester City.

It is understood up to five players are currently facing a race against time to regain full fitness ahead of the crucial tie.

The Red Devils are already sweating on the fitness of new signing Aaron Wan-Bissaka and Paul Pogba, both who had to withdraw from international duty with injuries.

Wan-Bissaka has been a regular under Ole Gunnar Solskjaer so far this season, but a back problem picked during the internationals could keep him out of action.

Pogba, on the other hand withdrew from France squad with an ankle problem and Didier Deschamps had to replace him with Arsenal midfielder Mattéo Guendouzi.

Jesse Lingard and Luke Shaw are the other players struggling with injuries, with the former forced to sit out the international fixtures against Bulgaria and Kosovo.

Anthony Martial is the other casualty on United’s treatment table and missed his side’s last game against Southampton after picking up a knock in the defeat to Crystal Palace last month.

Meanwhile, the Old Trafford dwellers are currently under immense pressure for results as they are currently without a single win since their opening day victory against Chelsea.

The side plummet after the win, drawing away at Wolves, before suffering a shock defeat to Palace at home.

The woeful form now has them sitting eighth on the log with just five points, seven behind leaders Liverpool.

By SAMUEL GACHARIRA
More by this Author

Malkia Strikers emerged winners of the qualification tournament with 11 points to get the sole ticket that was reserved for Africa at the Summer Games slated for July 24 to August 9.

It’s the third time that the volleyball queens will be representing the country at the Olympics having graced the 2000 and 2004 editions in Sydney and Athens respectively.

Kenya has never won a match at the Olympics and Uhuru has challenged Paul Bitok and his charges to make history in this year’s Games.

“It’s a big joy and pleasure to be here to celebrate your success. This success is a direct result of your hard work. To us you have already you have won. You have already delivered the cake. The rest will just be the cream on the cake,” said Uhuru.

“We are here to encourage you that as you continue with the journey that you are still up there. It’s not about winning but about giving your best. Even if you don’t win, we want people to say ‘did you see those Kenyan girls and did you see how they play’?” he added.

“We are going to support you, we are going to give you all that is humanly possible from our end because when this team performs, Kenya performs, ” assured Uhuru, who gave the team a token of Sh1 million.

Bitok thanked the government for their continued support to the team since he took over last August and asked the president to review government policies so that team sports can be appreciated better.

“Since the last time we were here, things have really improved with the Ministry paying players in good time. This is the kind of motivation that has helped me build a winning team. We are grateful to the government for their support,” said Bitok.

Skipper Mercy Moim echoed Bitok’s sentiments and promised Uhuru to return to Kenya with at least one win from the biggest stage of world volleyball.

“We are happy with the level of transparency at the ministry. Nowadays we get our allowances in our accounts and we don’t have to worry about it. This has really boosted our morale,” said Moim. “We have now come of age as a team and we are confident of winning two matches at the Olympics. We hope to get the best preparations because we can deliver.”

Kenya Volleyball Federation president Waithaka Kioni revealed he had received a roadmap for the Olympics from the technical bench and asked the government to support their preparations.

“The coaches have already handed in a program which shows how serious they are about the Olympics. They want to have a camp in Europe so that they can represent the continent well. This is the volleyball only team from Africa that will be at the Olympics and we are happy that the ministry is already treating them in a special way. We look forward to more support during the preparation phase, ” said Kioni.

Sports Cabinet Secretary Amina Mohammed reiterated her ministry’s commitment towards ensuring the girls get good preparations for the quadrennial competition.

“We are proud of these girls and what they have achieved over the years. As a ministry, we promise give them the best because they are capable of winning a medal at the Olympics,” said Amina.

Malkia Strikers are expected to start preparations for the Games in April with the technical bench having planned training camps in Turkey and Japan.

Athletics Kenya has expressed satisfaction that the systems put in place by them, Athletics Integrity Unit (AIU) and Anti-Doping Agency of Kenya (Adak) are working following the suspension of top Kenya elite athletes.

AK president Jackson Tuwei said during a press conference on Friday at Riadha House that the battle against doping will go a notch higher when Parliament passes the bill that will criminalise use of banned substances in the country.

The AK press conference came in the wake of the suspension of former World marathon record holder Wilson Kipsang and 2014 World Under-20 800m champion Alfred Kipketer for doping violation.

On Friday last week, AIU confirmed having provisionally suspended Kipsang, who is also the 2012 London Olympic Marathon bronze medallist for whereabouts failures and tampering with samples.

Kipketer, who won gold in 2014 and silver in 2017 in 4x800m at the World Relay Championships, has also been suspended for his whereabouts failures.

“Our stand on doping is well known and we are now working very closely with AIU, Adak and the government to eliminate the menace. The current investigations and suspensions are happening as a result of our current cooperation with AIU and Adak,” Tuwei said as he allayed fears that Kenya could be banned from taking part in major international events.

Tuwei warned athletes there will be nowhere to hide for drug cheats with the kind of machinery that has been put in place.

“They is nowhere to hide and it’s either they work hard to remain relevant or quit the sport since the anti-doping winds are too strong for those who want to engage in hide and seek,” said Tuwei.

Tuwei, who was flanked by senor deputy vice president Paul Mutwii and AK director in charge youth and development Barnaba Korir, noted that doping is a choice and victims should take responsibility and face the consequences.

“It’s a shame for experienced athletes to fail to manage their whereabouts schedule despite having taken them through several trainings. Either this is an act of ignorance or a deliberate move to take a short cut to stardom,” said Tuwei.

During the Athletes Conference last month in Eldoret, Sports Cabinet Secretary Amina Mohammed disclosed that the government had already formed a team to amend the Anti-Doping laws that will have doping criminalised.

Amina, who failed to state when the laws will be ready, reiterated that athletes reprimanded for doping will never represent the country again.

Tuwei emphasised that those found guilty of doping should plan for their retirement because there will be no second chance.

“We have also decided not to deal with only the consumer but also the source in a bid to end the menace,” added Tuwei.

Tuwei warned foreign coaches working in the country without a permit will be charged before being deported.

By SAMUEL GACHARIRA
More by this Author

Uhuru was speaking at Mama Ngina Drive Waterfront in Mombasa where he hosted the national women’s volleyball team after they qualified for the Tokyo Olympics.

Malkia Strikers emerged top during the Africa Olympic qualifiers held in Yaounde from January 5 to 9 to book the sole ticket reserved for the continent at the Summer Games.

“Sports has continuously put Kenya on the map. One thing that undisputedly makes us Kenyan is sports. Most people know Kenya because of our gallant sportsmen and sportswomen. You represent that which is best about Kenya,” said Uhuru before he emotionally delved into the Sports Fund and welfare of sportspersons.

“We have a fund, a dedicated fund for sports. I want you to make sure that money goes to sports people and not buildings. I want this money invested in our sports people,” he added amid raucous applause from Malkia Strikers players and coaches.

“Develop policies for our sportsmen to make a living out of sports. I want them to wake up, play and go to sleep without having to worry about where they will get money for food and other needs. Our players should lead comfortable lives just like any other Kenyan,” emphasised Uhuru, who gave the girls a token of Sh1 million and a further Sh500,000 to celebrate their success while in Mombasa.

The Sports Fund became operational last year and Malkia Strikers is one of the biggest beneficiary of the fund with the government having funded their trips to the African Games, World Cup and Africa Olympic qualifiers.

How blockchain can uphold democracy