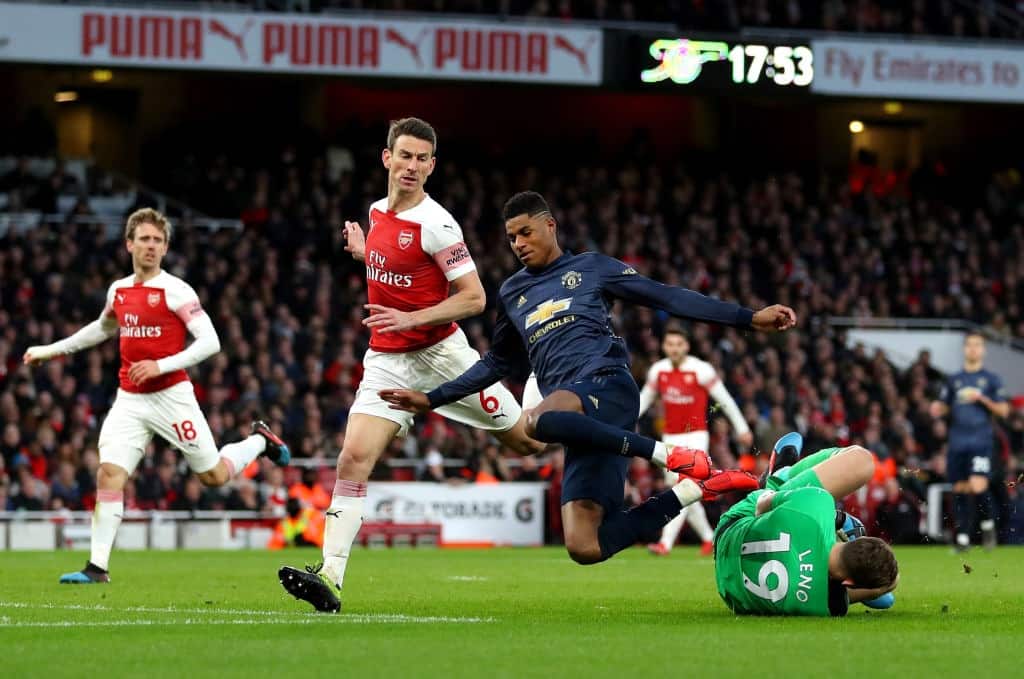 Manchester United will hope they can redeem their image when they battle Arsenal on one of the Premier League fixtures at Old Trafford on Monday, September 30.

The Red Devils suffered a disappointing 2-0 defeat to West Ham United at the London Stadium, with Marcus Rashford also suffering terrible injury in the process.

Although, they managed to progress to the EFL Cup fourth round stage after beating lower league side Rochdale 5-3 on penalties having played 1-1 on penalties.

However, former Liverpool striker Michael Owen believes the match will end in a stalemate at the end of regulation period.

He added that he would be surprised if Unai Emery’s men fail to score against David De Gea who has conceded against almost all the teams he has played against this season.

Owen was quoted by UK Metro saying: “After their loss at West Ham on Sunday, Manchester United have now lost seven of their last 15 games in the Premier League – as many as they had in their previous 40 games in the competition.

“Arsenal continue to frustrate and excite in equal measure, but they came from behind twice to beat Aston Villa on Sunday and they were a man light for the whole of the second period.

“United kept a clean sheet against Leicester City in their last home league game, but I would be surprised if the Gunners did not find the back of David de Gea’s net in what promises to be a fascinating game between two clubs desperate to return to the automatic Champions League places this term.

Man United are currently eighth on the log with eight points after six games as against the Gunners who have 11 points from the same number of games and are fourth on the table.

The north Londoners are unbeaten in their last five matches – three of which ended in victories and also kept two clean sheets in the process.

Meanwhile, the return of Rob Holding and Hector Bellerin will improve the performance of the Gunners with more quality players on ground to prosecute the match.

“Unai Emery will have been delighted by the return from long term injury of Rob Holding and Hector Bellerin in the midweek 5-0 League Cup success over Nottingham Forest.

“Add the impressive belated debut of summer signing Kieran Tierney and two goals from Brazilian teenage striker Gabriel Martinelli, and the suggestion is that the Gunners’ boss is going to have one or two difficult, but welcome, selection decisions to make in the weeks and months to come.”

Both sides are eyeing a return to the Champions League at the end of this season as they are currently campaigning in the Europa League having failed to qualify last term.

Solskjaer will however hope his side can avoid another defeat at Old Trafford after their 2-1 loss to Crystal palace earlier this season to avoid sack.

While Paul Pogba and Mason Greenwood returned into the team in their EFL Cup win over Rochdale, Anthony Martial, Luke Shaw, Diogo Dalot, Angel Gomes are not fully fit yet.

Eric Bailly is not also expected back into the main team until later this year after picking up an injury during their preseason tour.

United have picked a paltry eight points from six matches into the new season, leaving them sitting eighth on the Premier League standings.

And Evra, who has been working with the club’s youth teams as he seeks to completes his UEFA coaching badges, is desperate to see his former side to return to the top.

GYG BAND REPRESENTING KENYA AT THE JAMAFEST 2019 IN TANZANIA

Why Naomi Wafula cannot wait to get started...