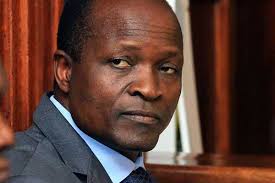 The construction of Kwigancha dam in Komosoko/Nyamosense ward in Kuria West subcounty, Migori county has been used as a conduit to loot Word Bank funds meant for the project.

The desilting and construction of the dam funded by the World Bank to the tune of Sh40 million has left area residents in anger after some dykes along the dam collapsed only a week after the project was handed over to the community.

The project was done by Evestar and Co Investment Limited of Suna, Migori.

It is claimed the contractor used substandard materials and inexperienced personnel to cut costs down after county officials in the department of agriculture demanded huge kickbacks before the award of the tender.

The project was awarded a month before the last general elections when Okoth Obado was the governor.

R e s i d e n t s neighbouring the dam have called on Ethnics and Anti-Corruption Commission to investigate and audit the project, saying before it started, they were told the water would be purified and pumped to supply nearby villages for domestic use but this was never to be, and that instead, what they are seeing is “something they don’t understand”.

“We suspect the contractor and the people who awarded him the contract just wanted to access the World Bank funds for personal benefit because as it stands, local residents have nothing to gain from this project. The desiltation is shoddy and the purported rehabilitation is a disaster in the making,” said Isaac Mwita.

The residents have also urged area MP Mathias Robi and MCA, to intervene in the matter to ensure justice prevails.

Eight in custody for exam malpractice in Transmara  » Capital News