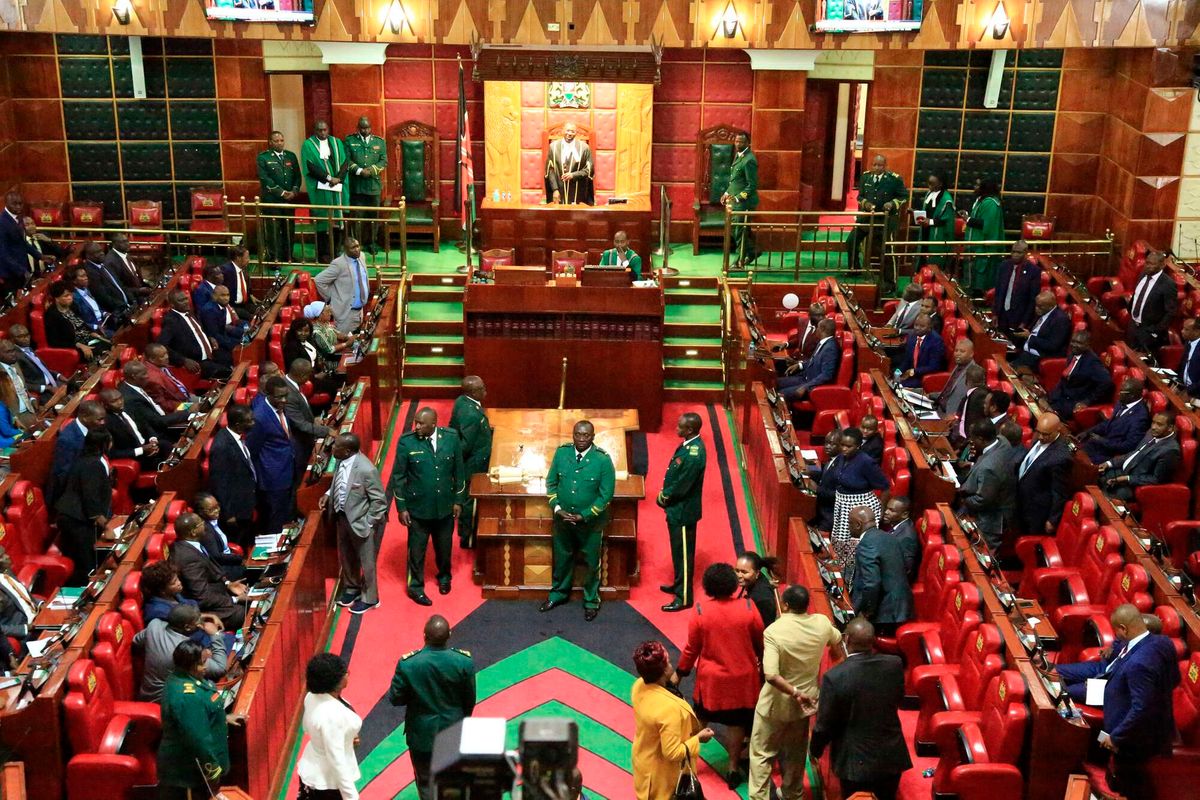 Members of Parliament are training their guns on a number of laws and regulations made during President Uhuru Kenyatta’s tenure, claiming they are illegal since they were not presented before the House for approval.

The lawmakers have cited several regulations that were put in place by Cabinet secretaries and State agencies and have now become law, saying they did not follow the correct channel before implementation.

Already, Speaker Moses Wetang’ula has been called to make a ruling on the matter after members of the National Assembly accused some State agencies, specifically the Central Bank of Kenya (CBK) and the Teachers Service Commission (TSC), of usurping the powers of Parliament.

CBK is on the spot for implementing the contentious large cash withdrawal and deposits regulations aimed at checking illicit financial flows like money laundering and terrorism financing, among others, without parliamentary approval.

TSC is yet to publish regulations on delocalisation of teachers.

Speaker Wetang’ula said the matter raised by the MPs is weighty.

The debate was triggered by Ainabkoi MP Samuel Chepkong’a, who chairs the House Committee on Delegated Legislation that considers and recommends to the House on whether to approve or annul regulations by government bodies.

Majority Leader Kimani Ichung’wah (Kikuyu) and Minority Whip Junet Mohamed (Suna East) also weighed in on the matter that puts CBK Governor Dr Patrick Njoroge on the receiving end for a second time, having received a similar bashing in 2019.

Mr Chepkong’a accused Dr Njoroge of failing to publish the banking regulations on the large cash deposits and withdrawals and have them approved by Parliament and instead issued circulars to the financial institutions.

The CBK circulars require the financial institutions not to receive money exceeding Sh1 million without the customer providing reasons as to where the money came from or authorise withdrawals above Sh1 million with explanation for the intended use.

The regulations governing this are in line with Section 33 of the Banking Act that became effective on October 1, 2018.

To enforce the CBK Governor Circulars, those who want to make large cash withdrawals are required to fill a form issued by their banks explaining where the money is being taken or where it has come from.

“There are some busybodies out there that are purporting to be making regulations without bringing them here and we know a number of them. They should know that it is only Parliament, through Article 94 of the Constitution, that has the exclusive authority to make regulations that have the force of law,” said the Ainabkoi MP.

The lawmakers have also said the policy on the Competency Based Curriculum (CBC) was never brought before the House through the Committee on Delegated Legislation for approval.

There are also the regulations by the Salaries and Remuneration Commission (SRC) issued last year which slashed MPs’ salaries and scrapped plenary sitting allowance.

The MPs are also targeting the regulations by the National Government Constituency Development Fund (NG-CDF), which they say has been making regulations — including procurement which will be done by the board — and strategic plans.

“These are regulations that have the force of the law but were never brought before the House through the CDF Committee,” Mr Chepkonga said.

“We are seeking your authority so that these persons or regulations that made these regulations be compelled by the committee so that we can use article 125 to summon those entities and persons to appear before the committee to present those regulations for compliance to ensure that they comply with the law. It is unfair to subject Kenyans to laws that are unconstitutional,” Mr Chepkonga said.

The MPs faulted the Lyn Mengich-led commission for bringing the regulations towards the tail end of the life of the 12th Parliament when MPs were campaigning.

The SRC tabled the legal notice on June 6, a day before Parliament went on indefinite recess to pave the way for the August 9 General Election.

Majority Leader Kimani Ichung’wa said State agencies have a tendency of bringing regulations when Parliament is on long recess and then going ahead to implement them, citing failure by the House to approve them.

“People use this House as an excuse by bringing regulations when MPs are not in session. After time has lapsed, those regulations come into force and our constituents accuse us of making punitive laws,” Mr Ichung’wa said.

The Statutory Instruments Act, 2013 requires any regulation-making body to table the regulations within seven days after being published

Speaker Wetang’ula while, supporting the MPs, said he will give direction on the matter next week.

FKF, Give us a well run league this time round