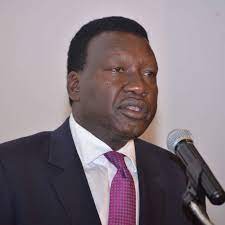 The return of William Ruto’s close ally Davis Chirchir at the Energy ministry is projected as an elaborate scheme by powerful State House operatives to control the cash-rich docket.

Pundits aver that by bringing the IT guru Chirchir partly charged with making him president’s, chief of staff, the head of state had sent a clear signal of how he expected the sector to operate.

Weekly Citizen has information that Chirchir, generally considered as a two-sided man, is poised to make far-reaching changes in ministry, some of which are likely to rattle the deputy president Rigathi Gachagua’s wing.

Fear in the Energy ministry parastatals is what is termed the Kalenjinisation of them as it happened when then deputy president Ruto shared power with former president Uuru Kenyatta.

Chirchir, the man who is now at the centre of initiating a rare overhaul at the lucrative ministry has perfected the art of corporate and political survival despite being described by many as complacent.

In the wake of looming changes at the Energy ministry, reports have emerged that professionals and political brokers from Ruto’s Kalenjin community are now angling to influence filling of top positions at the respective parastatals under the ministry.

At Kenya Power, the board that was installed by security CS adviser while still Energy CS Monica Juma future hangs in the balance. Juma made sure Geoffrey Muli was named acting MD.

Muli in private claims that Juma who was retained by Ruto in cabinet will push for his survival.

Already, Kalenjins at Kenya Power are celebrating with word that those acting are set to be confirmed. On the other hand, Kikuyus who claim the institution has been in their hands for years are lobbying through Gachagua to reclaim the management. 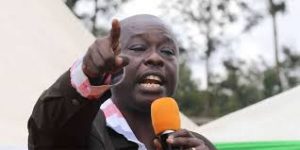 Kikuyus lobbying to take MD slot are Mugo, Mwaura and Njenga. Luos and Luhyas in top positions are uncomfortable as they do not have political godfathers to help them.

It is important to note that despite being very critical to the socio-economic development of the country, the Energy ministry has been turned into a looters’ paradise where managers continue to loot billions of shillings from taxpayers.

As a result, several mega projects under the sector have been delayed and dogged by scandals ranging from embezzlement of funds by the persons entrusted in their implementation to stakeholders exhibiting divergent interests in the projects.

Seemingly, the previous bad record set by the scandal-ridden ministry has now made all eyes on the head of state now that he has brought his confidant back to the ministry.

Chirchir was the first Energy CS under former president Uhuru Kenyatta’s administration in 2013 and unceremoniously suspended in early 2015 over allegations related to printing of 2013 electoral materials in the famous ‘chickengate scandal’.

He was later cleared by the Ethics and Anti-Corruption Commission.

When the 62-year old Ruto man appeared before the Moses Wetang’ula-led national assembly committee on appointments which vetted the cabinet secretaries’ nominees, he said his desire was to restructure the energy sector.

Ostensibly, the term ‘restructuring’, was interpreted differently among the parties with clashing interests in the energy sector.

He vowed to give Rerec additional budget to support the government’s subsidy programmes targeting last mile connectivity as opposed to Kenya Power which has been exposed to the risks which are then passed to the consumers.

And speaking of Rerec, you should be reminded that its CEO Peter Mbugua was suspended over multibillion shillings fake surveys.

An internal audit revealed the company paid at least Sh430 million for geospatial engineers and business consultants as well as universal land services and Theodore studies.

The audit raised red flags over irregular invoices and failed to ascertain if the surveys were indeed carried out prompting management to kick out accounting and finance staff as the board suspended the CEO pending investigations.

The confusion at Rerec is viewed as a low-hanging fruit by UDA powerbrokers that are out to control the energy sector.

Top managers at Rerec have engaged in serious witchhunt that saw a number being suspended by the CS Juma.

Juma’s sister Rose Mkalama is the most feared face at Rerec.

Pundits say what is going to take place at KenGen where a Kalenjin was appointed in an acting capacity, will be a litmus test to Ruto’s administration.

Abraham Serem was appointed CEO in an acting capacity to take over from Rebecca Miano who was appointed cabinet secretary for East African Community, Arid and Semi-Arid Lands, and Regional Development.

Until his new assignment that raised eyebrows, Serem was an insider serving as the firm’s general manager human resources and administration from March 2016 when he joined KenGen.

Word has it, Miano was named to the cabinet to clear way for Kalenjin takeover.

Serem is the man to take over from Miano with full State House support.

Those in the know say he has held secret meetings with power barons in the energy sector.

A shrewd operative, Serem’s love for mega deals is no secret. Samson Mwathethe is KenGen chairman of the board.

On the board likely to be reconstituted are Maurice Nduranu, Phyllis Wakiaga, Joseph Sitati, Peris Mwangi and Winnie Pertet.

Managers who were seen likely to replace Miano and are now regreting why they were not born Kalenjins are John Mudany – general manager, finance and ICT, David Muthike – general manager, strategy and innovation and Julius Odumbe operations.

Philip Yego – general manager, supply chain is happy with the rise of Yego and has been boasting that God has answered his prayers.