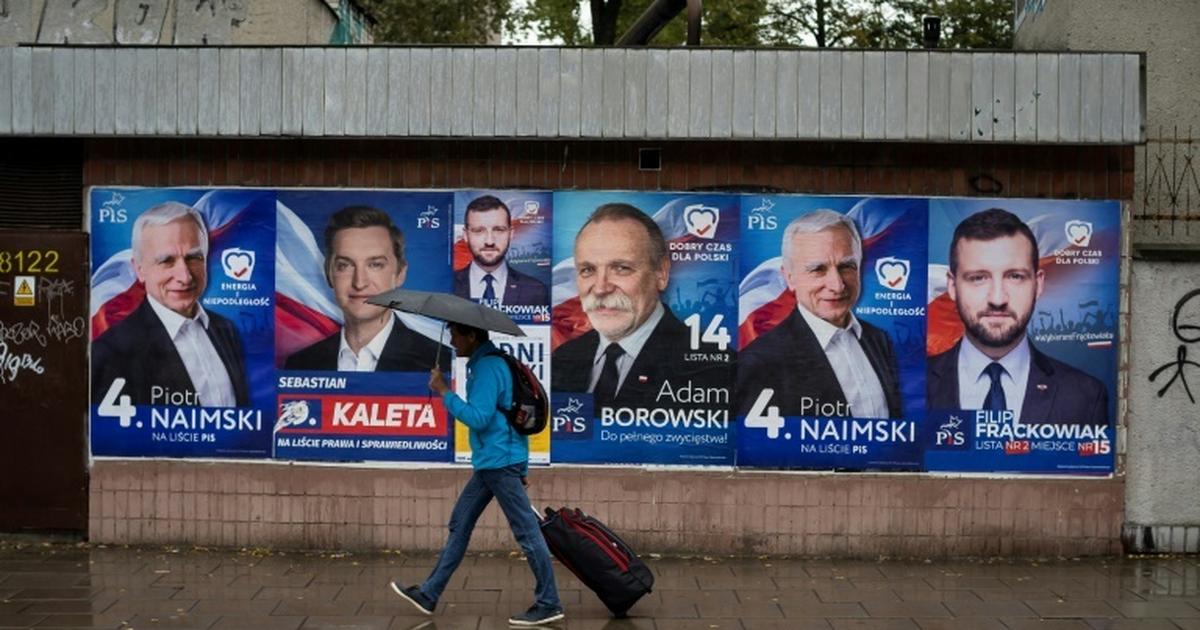 The opposition received an unexpected last-minute boon when author Olga Tokarczuk, a known government critic who won the Nobel Prize for Literature on Thursday, urged Poles to choose wisely “between democracy and authoritarianism” in the ballot, calling it the “most important” since Poland shed communism in 1989.

In office since 2015 and led by ex-premier Jaroslaw Kaczynski, the right-wing Law and Justice (PiS) party has sought to mobilise poorer rural voters by coupling family values with a popular new child allowance, tax breaks for low-income earners and hikes to pensions and the minimum wage.

Kaczynski is also among several populist leaders in the European Union favouring greater national sovereignty over the federalism championed by powerhouses France and Germany.

Condemning the PiS’s anti-LGBT drive and close church ties, but sharing its welfare goals, the left is set to enter parliament after a four-year hiatus.

Two separate opinion polls published Friday suggested the PiS’s majority is at risk as it scored 40 to 41.7 percent support compared to a combined 41.4 and 45 percent for opposition parties.

“Turnout will decide whether the PiS governs alone, whether it must build a coalition, or even if it might lose its majority,” Anna Materska-Sosnowska, a Warsaw University political scientist, told AFP. Turnout in the 2015 election tallied at 50.92 percent.

Kaczynski has capitalised on a populist backlash against liberal urban elites, similar to trends in Western Europe and the US.

His party’s bid to build a welfare state is addressed to Poles who reaped little benefit from the explosive growth and unfettered free-market drive after communism fell.

Analysts suggest that generous social outlays have also made the PiS a “teflon party”, cushioning its reputation amid a string of high-profile graft scandals involving senior members.

“They’ve (PiS) removed everyone who got mixed up in scandals… so they’re credible,” Janina, a 74-year-old Warsaw pensioner who declined to provide her surname, told AFP.

Others insist the social measures come at too high a price.

“The PiS gets votes by scaring people and then offering protection; in the 2015 election, migrants were the enemy, now it’s gay people, it’s unacceptable,” said Monika, a 38-year-old Warsaw mother of two working in the automotive sector.

The KO chose Malgorzata Kidawa-Blonska, the even-tempered 62-year-old deputy parliamentary speaker, as its candidate for premier in a bid to counter the PiS’s polarising politics.

“Chairman Kaczynski divides people… let’s protect Poland against such division, against such hatred,” she told supporters this week.

The KO has vowed to reverse PiS court reforms, which the EU says threaten judicial independence and the rule of law, but has otherwise offered voters little.

Experts warn that a strong PiS win will allow it to push through more judicial reforms likely to stoke conflict with the EU over the rule of law.

Joblessness in the country of 38 million people has hit a record low of some five percent in a tight labour market.

Although the PiS rejected the EU’s migrant quotas, Poland became the world’s top temporary labour destination in 2017, according to the OECD.

Around 1.2 million temporary workers, mostly Ukrainians, plugged a gap left by Poles who sought more lucrative jobs in the West after joining the EU in 2004.

Voting runs from 0500 to 1900 GMT on Sunday, with exit polls expected after balloting ends. Preliminary results are due on Monday.

What next for the great Kipchoge after doing the ‘impossible’?