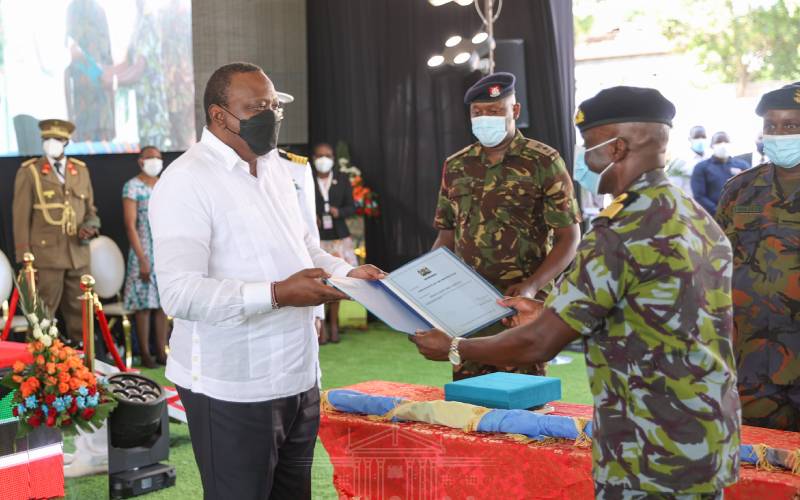 President Kenyatta commended the multi-agency team led by KDF for restoring Kisumu Port and its enabling facilities, adding that the launch of KSL will create new high-value jobs and business opportunities for Kenyans. [PSCU]

President Uhuru Kenyatta has challenged civilians institutions to emulate the Kenya Defence Forces (KDF) efficiency in public service delivery.
The President noted that KDF had demonstrated good work ethic in their service to the nation, especially in the revival of key infrastructural and economic projects, saying their efficiency has saved the country large sums of money.
“I only wish our civilian operators, our civilian administrators if they could only do a quarter of what is being done by Kenya Defence Forces then Kenya will be transformed,” President Kenyatta said.
The Head of State told off those criticizing the involvement of KDF in the delivery of public projects, saying the military has the capacity to double up as the country’s protector and implementer of crucial development programmes.
“Those complaining about KDF being awarded projects to an extent of seeking court interventions should understand that KDF are Kenyans who deserve equal opportunity needless to say that the same hand that carries a gun is the same hand that can handle a hoe,” President Kenyatta said.
The Head of State listed a number of  projects that have been successfully delivered by the military in recent years such as the revived Kenya Meat Commission, saying the Government had lost large sums of money in unsuccessful attto salvage such industries.
President Kenyatta, who spoke at Kisumu Port during the launch of the Kenya Shipyards Limited and laying the keel for the construction of new cargo shop, MV Uhuru II, said the revival of the port is a dream come true for the East African Community founding fathers.
“This is a dream our forefathers had but died because of our weaknesses. We have started to revive the dream so that our youth will have good jobs. This dream is being actualized because of the peace we have,” the President said.
At the event also attended by former Prime Minister Raila Odinga, the President said the full revival of Kisumu Port will improve Kenya’s social and commercial relations with the neighbouring countries, and reposition Kisumu City as Kenya’s frontier for regional trade and logistics.
“With an international airport, a pier, and a railway station, this city (Kisumu) will actualize the vision that the founding fathers of our three East African nations had in the East African Cooperation,” the President said.
The President, who was accompanied by visiting Burundi President Evariste Ndayishimiye, noted that the revamped Kisumu shipyard, which currently employs 300 people, will in coming weeks engage many more people as the building of MV Uhuru II kicks off.
Chief of Defence Forces General Robert Kibochi also spoke at the event which was attended by former Prime Minister and ODM leader Raila Odinga, Cabinet Secretaries, service commanders and other senior government officials.
Later, President Uhuru Kenyatta and his Burundi counterpart commissioned the revamped MV Uhuru cargo ship and the new Marine School, and inspected the ongoing dredging of the Port.
The Kenya Marine School is a Kenya Railways-owned college that was started in mid-60’s to train personnel for the defunct East Africa Railways and Harbors.
The training institution is being revived as part of the grand Government plan to create business and employment opportunities for Kenyans in the blue economy sector.

Tecno Camon 17 Pro vs Samsung Galaxy A32: How do the two compare?