Rayvanny baby mama hints that her relationship with the WCB singer is still intact!

Fahyma is still together with Rayvanny!

Just a few weeks ago the two allegedly broke up after Vanny boy cheated on Fahyma with a video vixen, Nanah.

Rayvanny was romantically linked to Nanah shortly after shooting the  I Love you. According to reports the WCB singer was attracted to the vixen’s humility and self respect that his baby mama lacks.

Things got heated up to a point where Rayvanny went ahead to share a photo of the lady on his page; showering her with praises.

Fahyma on the other hand called for a press conference where she confirmed that her relationship with Vanny Boy was over. 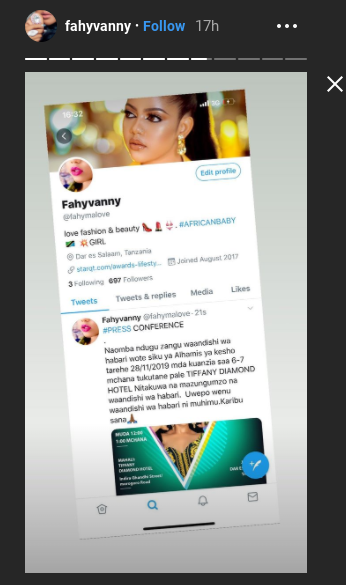 She however refused to address reasons (infidelity) for their break up saying they both thought it was best for their son sake.

Anyway, thanks to a video uploaded by Fahyma on her IG stories; she is seen showing off her young family’s portrait – probably to prove that she is back with the singer.

The mother of one also refused to change her name from Fayvanny to Fahyma…another reason showing that they are still working on their issues. They however don’t follow each other on social media like before!