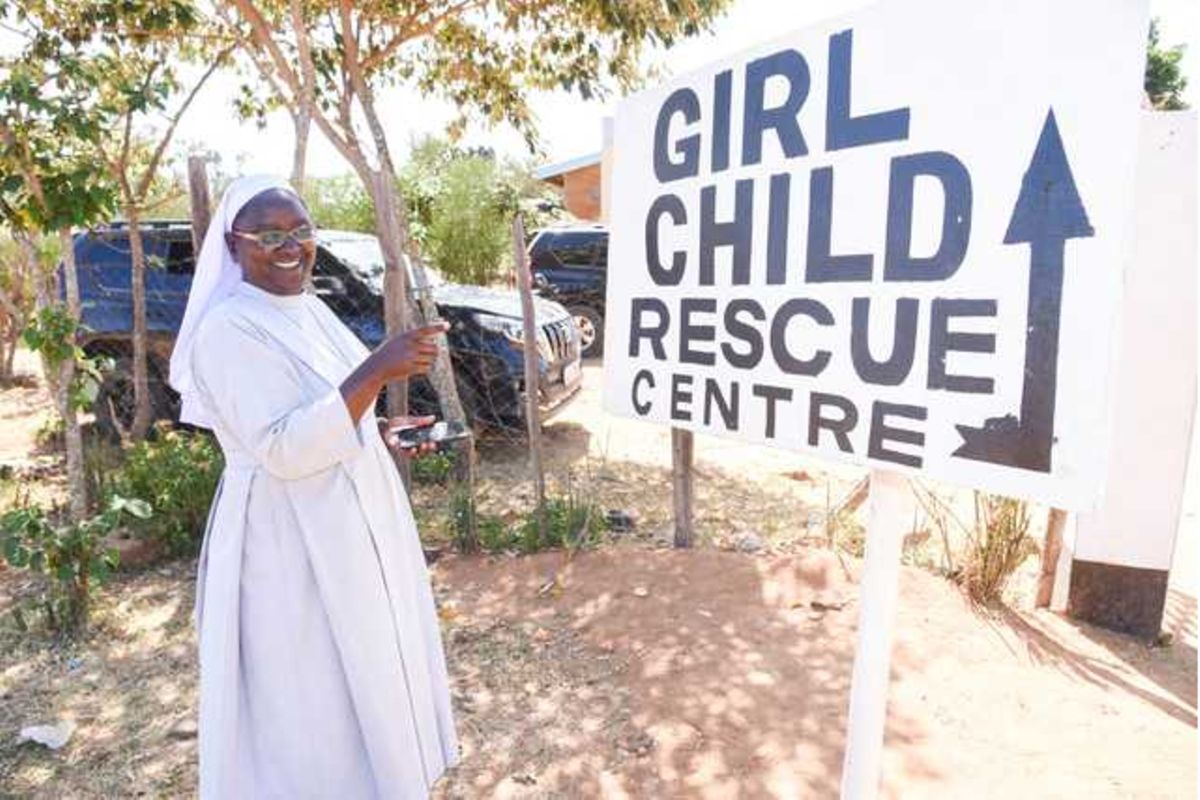 One evening in February 2020, Mercy Sepina (not her real name) was doing her usual domestic chores after school when her father informed her he wanted them to have some discussion.

Sepina, who was nine years old then, was taken aback by her father’s call for a discussion as it was very unusual for him to do so. The discussion was swift and short. Her father dropped the bombshell that she would no longer be going to school but would instead be staying at home.

“You are now becoming a woman and soon will have your own family. From today, you will no longer go to school, but stay home to help with the chores,” her father told her.

Devastated that this would mark the end of her education journey, she pleaded with her father to let her continue with school, but her pleas fell on deaf ears.

For months, she did not go to school and instead spent her days in the grazing fields herding her father’s cattle and at times helping her mother with domestic chores.

During this time, her family would receive visitors daily, including older men. They would bring gifts, among them sacks of sugar and blankets, and ask to see her.

Unknown to her, the men flocking to her home were suitors, who were seeking for her hand in marriage. One of them, a 72-year-old, beat all the others to get the nod to marry her. He is the one who brought the most items.

Sepina recalls having many unanswered questions when one evening after returning from the grazing fields she found many visitors at home, most of whom were women.

From her observation, she noted signs of an impending ceremony. And even before she could rest, her mother informed her that she was going to be married off.

A few moments thereafter, she recounts being called into the house. Here, she found a group of women. In a blink of an eye, an elderly woman in the group grabbed and subjected her to female genital mutilation (FGM).

“It was very painful and I bled very much. I feared that I was going to die. A day after I was cut, the old man came for me and took me to his home. I was to be his fourth wife. I was still in a lot of pain and could not even walk properly,” says Sapina.

A week after moving into the old man’s home, and still recuperating from the cut, she was assigned to herd her husband’s cattle and goats.

While looking after the cattle, she always admired pupils clad in their uniforms as they came from school. She yearned to go back to school. She vowed to do whatever it took to free herself from the bondage and get the freedom that she badly needed.

“While grazing the cattle, a thought to flee just struck my mind. In the evening, I abandoned the animals and decided to run away. I did not know where I was going. I just walked for many kilometres in a forested area. It was very terrifying and I told God to save my life.”

Sapina, who wants to be a pilot, was lucky. She came across a good Samaritan, who led her to the local chief, who, in turn, took her to a local rescue centre.

She is the third born in a family of six girls. Two of her elder sisters have already been cut and married off. Her other three sisters are still at home.

The story is no different for Hellen Lolosoli (not her real name), who escaped child marriage and FGM by a whisker in 2017. Hellen recalls how one evening after school she received the shocking news from her father that some people were seeking her hand in marriage.

“My father told me that henceforth, I would not be going to school. I asked him why and he told me that school had no meaning as a man would soon come to marry me.”

For one month, she stayed at home looking after her father’s cattle during the day and helping her mother with some domestic chores in the evening. She recalls during this period seeing dozens of men flocking to her home, some bringing in a lot of goodies as they all scrambled to marry her.

She tells Nation.Africa that it, however, took the intervention of her sister to save her from the jaws of child marriage and FGM. “My elder sister came and told me one evening she had overheard a conversation between my parents that I would be cut the following day in the morning before my supposed future husband would come to pick me up later that day.”

Armed with the intelligence from her sister, Hellen ran away to avoid the double tragedy of child marriage and FGM. Her bid to escape from these harmful cultural practices saw her spend two days in the wilderness without food and water.

She was, however, lucky on the third day after she met a woman, who was herding cattle. She showed her the direction to a police station.

At the police station, officers took her to hospital to get treated for injuries suffered during her escape through the forest, before transferring her to a rescue centre.

Tip of the iceberg

The confessions by the two girls are just but a tip of the iceberg of the agonies faced by many girls in Samburu County, most of whom are survivors of child marriage and FGM.

Some of the survivors are housed at Mary Immaculate Girl Child Education Rescue Centre in Suguta Mar-Mar, about 30 kilometres from Maralal town.

The centre – run by Immaculate Sisters –  has become a beacon of hope and safe haven for hundreds of girls in the county, which has high prevalence of FGM and child marriage.

Sr Teresa Nduku, a nun from the Immaculate Sisters of Nyeri, is in charge of the centre. She tells Nation.Africa that they were inspired to start the facility after cases of girls dropping out of school became rampant.

She reveals that sisters from her congregation who were teaching at the local Suguta Mar-Mar Primary School became concerned. Upon enquiry about what was behind the rising numbers of school dropouts, they were informed that they had been married off.

Every evening, more and more girls were camping at the sisters’ house pleading with them to hide and prevent them from being cut and married off. Most of them are below the age of 13.

Currently, the rescue centre, which sits on 16 acres donated by the county government, hosts 78 girls, all of whom are survivors of child marriage and FGM.

The center’s mission is to safeguard and empower girls subjected to FGM and child marriage. The girls are brought to the centre by chiefs, children’s officer, police and well-wishers. During the day, they attend classes at a nearby public primary school.

“Here at the centre, we feed, accommodate, provide safe custody and support girls through education. Since we cannot manage on our own, we normally rely on the people of goodwill for support,” Sr Nduku says.

Since the centre opened its doors in 2004, some 450 survivors have passed through it. The nun is happy many of them are now leading a successful life after being rescued.

“We have many survivors who are now teachers, secretaries, businesswomen and a police officer. We are so proud that as a centre, we have made a mark in their lives.”

Due to constrained financial resources, Sr Nduku says the centre is unable to accommodate more girls. Their plan is to increase the accommodation capacity to 150 once funds are available. She is optimistic that they will soon get a well-wisher to help them add an extra dormitory and a dining hall.

The ongoing drought has worsened their situation as many girls in the region are being married off so that their families can get food and money for survival. “Here, girls are looked at as assets that can be given out to the benefit of the family,” she notes.

However, due to the sustained campaign against FGM and child marriage, the sister in charge says the situation is slowly changing and parents are now understanding the importance of education and taking their girls to school. She says her happiest moment is seeing girls rescued, being empowered and later becoming a successful people in society.

“It is always by joy to see the girls coming to us to introduce their families and seeing they are out there living a happy life not with the old men they had been forced to stay with. Some of the rescued girls have went on to become anti-FGM champions and others have become mentors to the girls,” Sr Nduku tells Nation.Africa.

The centre also equips women with income-generating skills, including beading and tailoring, to enable them to become financially independent and self-reliant. This boosts their living standards. Once economically empowered, they will not marry off their daughters to get the reverse dowry on which to depend on during tough times.

The centre has come up with innovative ways to fight the vices, including involving boys and men. Through the HeForShe programme, it engages boys in protecting their sisters from these harmful cultural practices.

Letikirich Yusuf, a HeForShe instructor, says the programme, launched in January, is aimed at empowering boys and young men (morans) to fight harmful traditions. He says so far they have brought on board 120 boys from neighbouring schools.

“Starting next year, we will be extending the programme to more schools in the county. We want the boys to learn from a young age that it is wrong to subject a girl to a cut and marry her off while she is still a child,” Mr Yusuf says.

Catherine Nyambura, a clinical psychologist attached to the centre, notes that most FGM and child marriage survivors undergo a lot of trauma and mental health-related issues.

“Many of them are usually very devastated. They tend to keep to themselves, but through counselling they are able to open up. We help and walk with them through the healing process. It is not easy, but we eventually manage,” she says.

Dr Abiodun Oyeyipo, the UNFPA country deputy representative, says state and non-state actors have a responsibility to protect girls from child marriage, particularly during times of crises, such as the ongoing drought.

“As the country endures the worst drought in over 40 years, more girls are at risk of child marriage, with some families choosing to marry off girls in exchange for food or cattle, or to have less mouths to feed. UNFPA will continue to support the local administration and partners to strengthen prevention and response mechanisms that will accelerate an end to these two vices,” Dr Oyeyipo says.

UNFPA has been working with partners, including the county government of Samburu, World Vision Kenya, and the Anti-FGM Board, to protect the rights of girls through support for the development of policies and community engagement on transforming gender norms.

“We now have a scenario where we are having many more girls than boys in local primary schools. The local administration and Nyumba Kumi officials have been working tirelessly to ensure girls who are in danger of being cut and married off are rescued and taken to the rescue centres,” says the administrator.

Samburu is one of the 22 hotspot counties with high FGM prevalence, which, according government data, stand at 86 per cent. Child marriage is at 50 per cent.