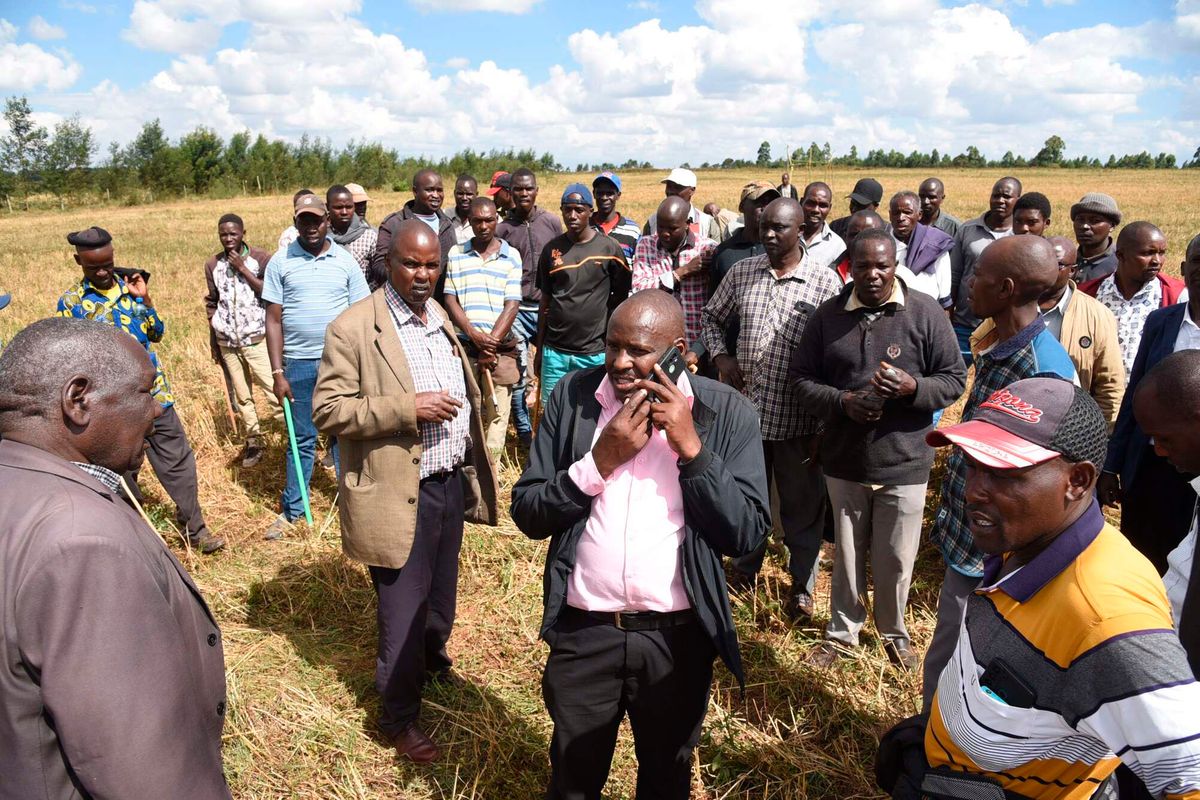 The late President Daniel Toroitich Arap Moi’s bosom buddy Mark Kiptarbei Too is on the verge of losing prime property worth over Sh100 billion to squatters.

It is said Mr Too, who rose from a humble background to a powerful politician in the Kanu regime, had immense influence in Kenya and even beyond the continent.

For this, he was given nicknames including “Mr Fix-it”, “Bwana Dawa” (medicine man) and “Chairman”. In some quarters, he was quietly referred to as the Orkoiyot, named after the Nandi seer who foretold the coming of a big “snake”, meaning a railway line, in the colonial days.

For Mr Too, a change in fortunes started when Tiny Rowland gave him the title of deputy chairman of Lonrho East Africa. Since there was no substantive chairman, this made him the de facto boss of the Lonrho empire in the region.

It was the Lonrho empire that sharpened Mr Too’s skills, nurtured his talents and honed his negotiating prowess as he brushed shoulders with white men and women in boardrooms in European and African capitals.

While Lonrho took him to places including Mozambique, Angola and South Sudan, as well as in West and North Africa, it was the source of a nightmare for the late politician’s family.

Lonrho’s land has been in dispute with the Sirikwa squatters since 2007. Lonrho, in talks with the squatters and the government, had agreed to surrender 25,000 acres to the government for the express purpose of settling them.

The court was also told that the surrendered land was to be held in trust for Sirikwa and that on October 28, 1998, President Moi approved Sirikwa’s application to be allocated the property surrendered by Lonrho Agribusiness (EA) Ltd.

The Sirikwa squatters also told the court that Mr Too took advantage of his position at Lonrho to allocate and transfer the property to himself and subsequently sold it to third parties.

Mr Too became Moi’s best friend because of his ability to ameliorate tension among people and that enabled him to start cutting both business and political deals.

For instance, in 1997, Mr Too cleared the path for former President Uhuru Kenyatta to join politics.

Mr Too was then a Kanu nominated MP but agreed to step down to create a chance for Mr Kenyatta.

And now, with a stroke of the pen, his family could lose the 25,000-acre tract off the Eldoret-Kapsabet road in Kapseret constituency that is worth Sh100 billion.

A three-judge bench of the appellate court in Kisumu on November 18 dispossessed Mr Too’s family of the land, which the late politician had christened Fanikiwa Limited.

The judges described how the MP used his position as the chairman of the defunct Lonrho Agribusiness to illegally acquire the land, depriving the squatters of their constitutional right to own property.

They found that Mr Too was part and parcel of the misrepresentation and fraudulent allocation and transfer, to himself and Fanikiwa, of the parcels of land that were expressly surrendered for settlement of the Sirikwa squatters”.

“Mr Too was simply the prime mover in the scheme to swindle Sirikwa of the surrendered land and cannot be described by any stretch of the imagination as an innocent purchaser.”

Mr Too’s family has appealed the ruling and obtained conservatory orders stopping the squatters from interfering with the land.

The court said Mr Too was the majority shareholder and a director of Fanikiwa, and in the petition, he was sued in his personal capacity for allegedly violating Sirikwa’s constitutional rights and legitimate expectation to be allocated the properties by having those properties allocated and transferred to him.

Mr Too also lost 67 acres he had been awarded by the High Court after the appellate court said there was no basis or justification for the decision.

Mr Too, who died on December 31, 2016, was buried on the farm. During his lifetime, he was a man of great humour and wisdom and had a big heart, attributes that had warmed Moi’s heart.

Moi visited Mr Too several times at the farm near Eldoret International Airport, and the squatters claim his proximity to power made him deny them their land.

The Sirikwa squatters’ chairman, Benjamin Rono, said the property was part of their heritage and their forefathers had lived on it from time immemorial.

“Our people were tortured on this land and some died in the process. Their houses were burned and ultimately their properties were expropriated but their lineages continued to live on the land as squatters,” he told the Nation on Thursday at the farm as survey work went on.

“The company, upon winding up their operations, initiated the process of settling the squatters on the land but first surrendered it to the squatters.

“Shockingly, the land was illegally registered as private property and we have been in court to prove we are the rightful owners for the last 15 years.”

Born in 1952 in Ndubenet village, Nandi County, Mr Too later migrated to Uasin Gishu County. He rose through the ranks to become one of President Moi’s most trusted and likeable allies, thanks to his political antics and astounding tricks.

Besides working for Lonrho, he was also a former assistant minister in the office of the President and chairman of the Kenya Sugar Authority and director of Standard Chartered Bank, among other positions.

He was also an established farmer in the North Rift, rearing livestock and growing crops.

Mr Rono said the court’s ruling was a big relief to the squatters and they had already moved in to settle on it, ending their anguish of being referred to as squatters.

“We know our members through certificates of membership and they will share 17,800 acres amongst themselves because part of the land has been set aside as public utilities after it was compulsory acquired by the government,” he said.

“We have opened an administrative office at the farm and at the moment survey work is ongoing as the land is being subdivided among the over 1,200 beneficiaries,” Mr Rono said.

“We will not allow the police to interfere with our operations on this farm unless they come with an order directing us to stop taking over our land.”

The squatters have erected houses as the survey work goes on and the majority of them have brought in their livestock to graze on the land.

But Mr Too’s family still has a fighting chance.

On Thursday, they got a reprieve after the Supreme Court issued temporary conservatory orders barring the squatters from accessing the land.

Justice Njoki Ndungu restrained the squatters from taking possession of the land or destroying any property on it, including exhuming the body of the late Too, until the matter is heard and determined.

“That prayer four be and is hereby granted allowing a temporary injunction restraining the first respondent, its members, its agents, servants, employees, and/or representatives or any other party from entering, taking possession, destroying, occupying, defiling the grave and the remains of the body of the late Mark Kiptarbei Too …,” Justice Ndungu ruled.

Justice Ndungu also said Chief Justice Martha Koome will have to give directions on the hearing of the appeal.