State was not consulted on Kiama appointment, Magoha says 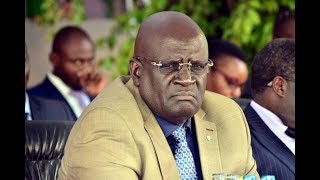 By OUMA WANZALA
More by this Author

Education Cabinet Secretary Prof George Magoha says he revoked the appointment of Prof Stephen Kiama as University of Nairobi (UoN) Vice-Chancellor after the institution’s council failed to allow for a government consultation process that includes informing the Head of State.

Prof Magoha said he had asked the dissolved council chaired by Prof Julia Ojiambo to allow him to do further consultations.

“All senior appointments in the country, be it TSC, KNEC, public universities…when the process is complete the interviewing entity consults with the government. It is not an information process it is consultation,” said Prof Magoha on Monday.

“The government looks at many other things…The president is not bound by my recommendation, the council’s or any other entity…There is a candidate they recommended and I said am consulting. They went ahead and made the appointment,” he added.

He said when he went to Mombasa President Uhuru Kenyatta asked him about the the appointment, signalling that the government had been left out of the naming process.

“What you are seeing is a directive coming from somewhere. Somebody somewhere is pulling strings to destroy the university,” said Prof Magoha.

He was speaking at Kibera primary school in Nairobi while checking on progress of Form One reporting.

He said the council went on to inform him after making the appointment.

Prof Stephen Kiama, whose appointment as the University of Nairobi’s Vice-Chancellor was revoked on Friday, says he is still in charge.

The situation has caused confusion at the university, with staff and students not sure who to take instructions from.

On Sunday, Prof Kiama placed an advert in the local dailies cautioning all stakeholders and collaborators against working with Prof Mbeche – who was put in charge as acting VC after Prof Magoha revoked the council’s pick.

“This is to inform all stakeholders and collaborators that any person or institution entering into a contract with any other person other than the legally appointed vice-chancellor, Prof Stephen Kiama Gitahi, purporting to represent the University of Nairobi, does so at their own peril and the university will not honour or be held liable for such commitments,” said the advert.

Despite a recent law change that was meant to bring order in the recruitment of top university administrators, chaos still persists.

Smog and rain: Conditions cause havoc at Australian Open