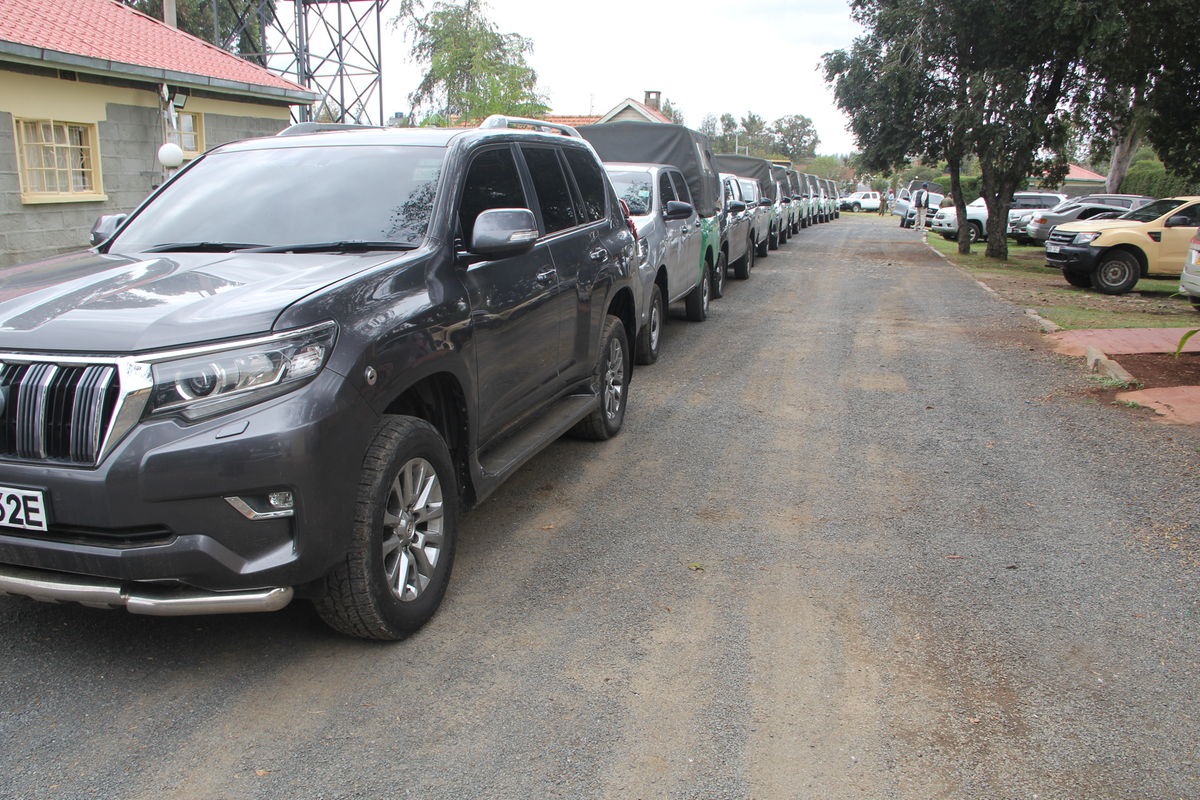 For the Hilux double-cabin vehicles, each unit would have cost Sh32 million at the end of the five-year period.

At the time Mr Irungu cancelled the tender, the county had paid over Sh500 million to lease the 21 vehicles. With the termination, Laikipia does not own any of the vehicles after blowing Sh500 million on the project.

On June 27, 2020, Bomet governor Hillary Barchok announced that his administration was terminating a Sh43 million-a-year ambulance deal with the Kenya Red Cross following a meeting with agency’s officials.

Former Governor Joyce Laboso had renegotiated the deal to three ambulances. But Mr Barchok said Bomet had resolved to buy, equip and maintain its own ambulances at a cost lower than what was being spent on the deal. Bomet had already paid nearly Sh193 million.

Kenya Red Cross had in 2014 been contracted by several counties over the leasing at Sh600,000 per equipped ambulance.

In Garissa, the deal got Governor Nathif Jama in trouble as he was charged alongside eight other county officials with breaching procurement laws.

Ethics and Anti-Corruption Commission officials had found that there were cheaper medical service providers that were not contracted, for instance, St John’s Ambulance Kenya, which was offering the same service at half the Red Cross cost.

The Red Cross has for years defended its leasing deals, which targeted counties, saying they were cost-effective. The big question is: Are taxpayers getting value for money in leasing services that the national and county governments are paying premium price to acquire?

Kenyans have had to grapple with the question, as a decision by the government to move from owning to leasing elicits mixed reactions on value for money.

When the Jubilee government launched its vehicle leasing programme, a multibillion-shilling industry was born.

Vehicle manufacturers and equipment lessors have registered revenues in excess of Sh80 billion in the last 10 years, even as questions arise over whether taxpayers save anything in the programme.

The latest round of leasing deals began last month when a consortium of RentCo Africa, DT Dobie and Stanbic Bank delivered 50 Volkswagen sports utility vehicles (SUVs) to the Directorate of Criminal Investigations (DCI).

They have a contract to deliver 111 SUVs to the National Police Service, and will receive Sh510 million, meaning taxpayers will fork out Sh4.59 million for each Volkswagen Tiguan that the police will use for either four years or until they clock 160,000 kilometres, whichever comes first.

RentCo founder Robert Nyasimi holds that leasing is the best way out for institutions, despite a few challenges, especially in the public sector.

Delayed payments by the Treasury and change of government have become the biggest risks for leasing firms, he said. “When the government changes, sometimes the individuals that come in believe the contracts were to benefit some specific people so they may start pushing the termination of the contracts. Tender wars are also a challenge,” Mr Nyasimi said.

At the time, a zero-mileage Ford Ranger was retailing for Sh5 million, an indication that taxpayers paid twice the cost of a vehicle to lease for just four years.

In 2016, the government leased 40 station wagons and five ambulances from Urysia at Sh631 million over four years. At the time, the station wagons were selling for Sh5 million. This meant that Kenyans paid over Sh10 million to lease each vehicle from Urysia.

An expert told Sunday Nation that the recent Volkswagen Tiguan deal could be good for Kenyans, as a brand new one with zero-mileage costs between Sh5 million and Sh5.5 million. “It is a fair deal. So to get them at Sh4.6 million over a four-year period is not bad. That one (the Ford Ranger contract) seemed a bit steep,” said the expert, who declined to be quoted on the record.

Critics, however, note that at the end of the period, the government won’t own the cars despite having paid millions of shillings.

Recently, the Treasury revealed that the deals have not been as cost-effective as promised during the launch a decade ago. President Uhuru Kenyatta’s administration had promised that leasing instead of buying and maintaining would save Kenyans Sh4 billion each financial year.

But the Treasury recently said that taxpayers have saved Sh79.776 million each financial year since the programme’s inception, less than two per cent of Mr Kenyatta’s promise. The presentation was, however, from findings of a draft report.

The final report is expected to be released in the next few days. This means that at the national level, Kenyans are making decent savings by leasing instead of owning and maintaining vehicles.

Despite the meagre savings, the report, drafted by Treasury consultant Peter Makokha, states that leasing has made some positive contributions to the economy.

The programme, the draft report states, has seen banks make available Sh10 billion yearly in financing of contractors. High costs in some of the leasing deals has been attributed to little authority granted to the National Treasury to negotiate better contracts that can save more money.

“However, the programme lacks institutional grounding and operates on an ad-hoc basis with no operational structure. The National Automative Policy and the Government Transport Policy are drafts.

“The programme has injected over Sh80 billion into the economy, paid insurance premiums worth Sh2.08 billion, contributed Sh1.6 billion in taxes and offered a steady demand for fuel worth Sh2.3 billion.”

The final report is expected to shed more light on the leasing programme’s value for money.

“The high cost is attributed to non-discounted insurance, loopholes in procurement processes and open tendering that does not allow price negotiation,” the report states.

NCBA Bank, a firm co-owned by Mr Kenyatta’s family, is one of the biggest contractors the government has engaged in the vehicle leasing programme.

The lender has an asset financing subsidiary that does the deals. In November 2021, it led a consortium that also has Toyota Kenya in securing a Sh1.2 billion deal to furnish the police with 250 vehicles on a four-year lease.

Star Rentals, a firm linked to the family of former President Daniel Moi, is also doing leasing business with the government, as it has supplied some vehicles to the National Police Service. The leasing programmes have, however, not been free of controversy.

Battles before the procurement regulator and the courts have often stalled contract execution as top manufacturers, financiers and dealers fight for tenders.

In 2014, the National Assembly’s Public Accounts Committee received a sworn statement that the Al-Futtaim Group-owned CMC Motors may have influenced a tender award by giving top Judiciary officials three cars.

Prof Karuti Kanyinga, a governance expert, argues that owning and maintaining is not necessarily a bad idea if the vehicles are not misused.

He told Sunday Nation that a good chunk of the vehicle depreciation can be attributed to reckless driving and how rogue public officers use cars for personal errands.

“We make the mistake of using vehicles without efficiency. The way some of the vehicles are driven on the road, how some police officers use them for personal errands… if they were used with efficiency, there would be no waste. But nobody demands accountability when these vehicles are misused,” Mr Kanyinga said.

While the government has warmed up to leasing, the private sector has arguably adopted the system much faster. At the onset of Covid-19 in 2020, East Africa’s largest retailer Tuskys collapsed under the weight of reduced business, heavy supplier debts and gross mismanagement.

Debts owed to landlords, suppliers and other creditors for years had slowly built up into a free for all situation as companies scrambled to auction computers, trolleys, shelves and other equipment to recover their money.

But on September 29, 2020, RentCo Africa filed an application in court to stop auction of assets, as it emerged that the firm had leased a lot of equipment to Tuskys, including trolleys, CCTV cameras, shelves, software and generators in a deal that was to earn RentCo over Sh500 million. It covered 19 Tuskys branches.

At the time of its collapse, the retailer still owed RentCo Sh383 million. RentCo had a similar deal with Uchumi Supermarkets, which came to the light in a 2016 audit of the retailer’s operations.

The audit revealed that RentCo had bought equipment from Uchumi and leased them back to the retailer for Sh1.6 billion.

The firm has in the past inked leasing deals with Laikipia County (Sh180 million), West Kenya Sugar (Sh600 million), the US’ International Autosource to furnish its expatriates with vehicles and KenGen, among other entities.

At the time of the Uchumi deal, RentCo was nearly four years old and had leasing contracts worth Sh4.5 billion.

To get the deal, it beat a rival that has been in the industry for much longer—Rentworks East Africa.

Today, RentCo has grown nearly four-fold and has deals worth over Sh15 billion.