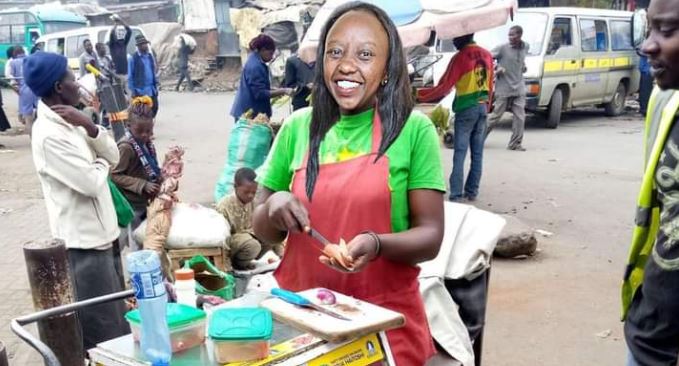 Kenyans on Twitter(KOT) came out in numbers Wednesday to react to a video of President William Ruto’s daughter Charlene Ruto speaking about her side hustle while in Uni.

Charlene was speaking as Chief Guest at the 5th National Student Leaders Summit held at The University of Nairobi on Tuesday, December 6.

In her supposed motivational speech, the First Daughter told student leaders that she sold Smokie Pasua with Kachumbari accompaniments while pursuing her Bachelor’s Degree in Communication at Daystar University.

Charlene graduated sometime in 2015 when her father was Deputy President in their first term with President Uhuru Kenyatta.

“I had a business of selling smokie, kachumbari at Daystar University…hiyo ndio kitu ilikua inauza sana…and he really encouraged me in that small business I was doing and one principle he taught me, ‘that I want you to…,” Charlene said before she was cut short by the audience.

A section of the audience can be heard in the now-viral video disputing her claims with quips of ‘Hiyo ni Uwongo’ (That’s a lie).

Some questioned how the daughter of a full Deputy President could resort to selling smokies to make money.

When the video made its way to Twitter, the infamous KOT concurred with the audience that Charlene was lying.

By Wednesday evening, Charlene Ruto was a trending topic on Twitter.

This is not the first time Charlene has had a run-in with KOT, who have since nicknamed her Quickmart Ivanka.

Charlene’s role in the government continues to leave many scratching their heads, hence the comparison to former US President Donald Trump’s daughter Ivanka Trump. 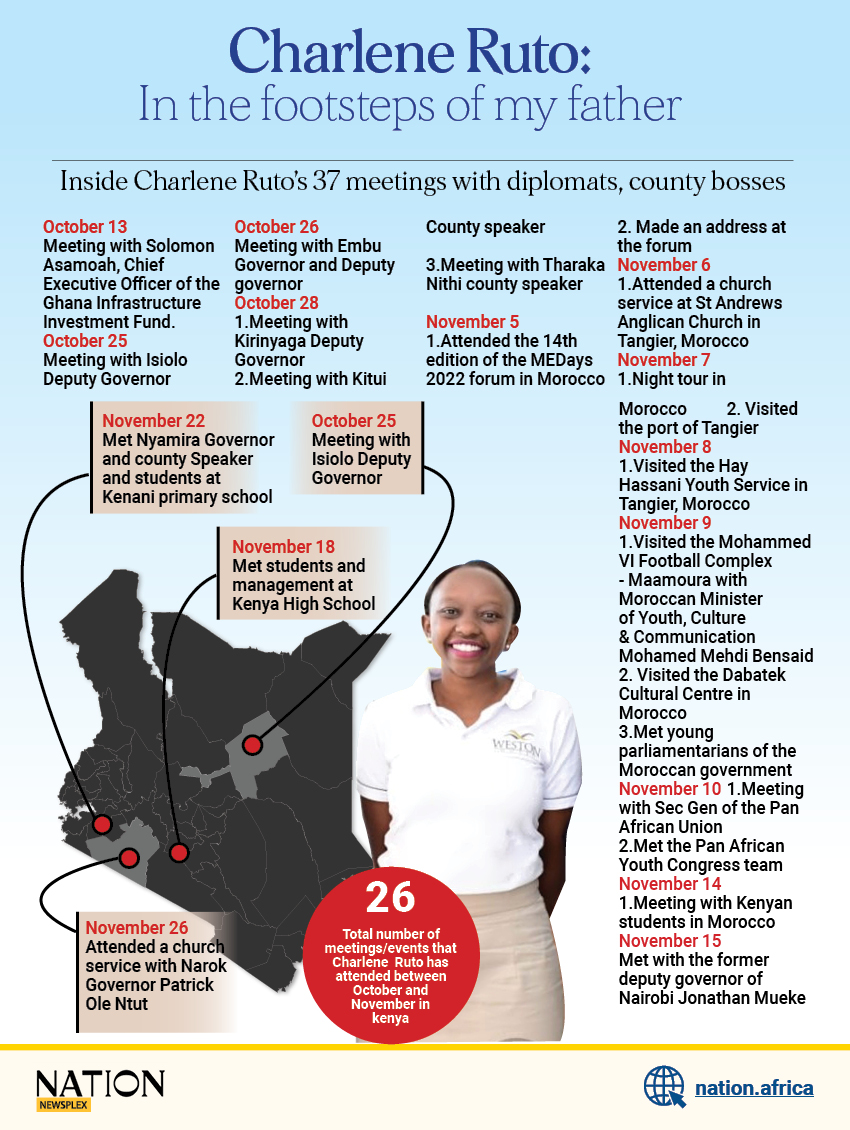 Ivanka often accompanied Trump as an unofficial adviser before she was assigned the role officially.

The Quickmart in Charlene’s nickname was an apparent reference to how the retail chain has been popping up in almost every town, just like Charlene has been traversing the country and the continent.

In an apparent clap back at her nicknamers, Charlene Ruto last week shared a video shopping at Quickmart Supermarket.

“Fresh and easy does it? We move regardless. Where are we popping next?” she captioned the clip.

Here’s how KOT reacted to Charlene Ruto’s supposed side hustle.

We’re crossing over to our very own Daystar University Hustler, at the Sugoi Ted Talk Conference. Ms Charlene Ruto, take it away. pic.twitter.com/2ChLqZfEsN

This Charlene Ruto and Philemon Kirwa same WhatsApp group! I love how kenyans Laughed out loudly 🤣😂😂. Kwani smokie business is that profitable in the campuses. Someone who was at Daystar University to bring receipts. pic.twitter.com/HxpVYTLOEL

Charlene Ruto whose dad became a millionaire right in campus was selling smokies and kachumbari at Daystar University. Ironically, this is supposed to be less than 5 years ago and none of the students saw or bought from her. It is not bad to be rich. At least be honest. https://t.co/zyC322pHmm

Like father, like daughter. Charlene Ruto, the daughter of President William Ruto, claims that she used to sell Smokie and Kachumbari at Daystar University! Outright lies of course. pic.twitter.com/gML6OszDxI

Charlene Ruto should chill. Tafuta political prominence pole pole, its a marathon not a sprint. Your dad started planning for 2022 in ’92. Learn from him. You’re helping Azimio shape narratives against him & you’re distracting his online army. They should be defending him not you

Dear Charlene Ruto. I honestly dont know you well enough. But let the words of Mahtma Gandhi comfort you; *** ‘First they ignore you, then they laugh at you, then they fight you, then you win!’ That is it! https://t.co/lxeDPRW6Ym

Anyone who bought the smokie and Kachumbari from Charlene Ruto should come forward at attest her statement. Hatuezi bebwa ufala na Baba alafu pia mtoto atudanganye.

Quickmart Ivanka, Charlene Ruto went on a podium and like his father, she chose to lie. You would love to see how the crowd shuts her out. By the way, Kenyans are not fools. pic.twitter.com/ReczVESgM7

Charlene Ruto is doing well, but there’s a clip she’s addressing University Students. In that clip she mentions how she used to sell ‘smokie kachumbari’ at Daystar University and how his father, the President encouraged her.

Someone from the crowd shouted, ‘Uongo!’

Charlene Ruto back then when she was selling smokie pasua to earn an extra shilling during her time at Daystar University while her Father was the Deputy President of Kenya. pic.twitter.com/WrIHFvqQCt

I do not know why when people succeed in life they always like to associate their past with poverty. Now Charlene Ruto is telling us that she used to sell smokie Kachumbari at Daystar University. Is she speaking to motivate or to mock those listening to her?

Charlene Ruto says she sold Smokies and Kachumbari at Daystar University , and His Father President William Ruto then Deputy President used to Support and encourage her , we are now legalizing lies inorder to fit in the Hustlers Bracket ,we opt for Kamkunji grounds ! 🤣💥🔨 pic.twitter.com/XK2V0QFQp6

They wanted to attack Winnie odinga for failing to meet Nabii Ruto only for azimio brigade to post a video of Charlene Ruto lying that she used to sell smokies at Daystar when her father was the DP with a chicken business worth 1.5m a day , several hotels and choppers
Waongo hawa pic.twitter.com/dlYigaMpq3

Charlene Ruto is an example of Bottoms Up. Selling smokies at the University was not easy. 🤣 pic.twitter.com/dl45CEa8ZX

Charlene Ruto is as brazen a liar as her dad. She’ll thrive in our political space. https://t.co/BhPJ7fOznq

Where do people like Charlene Ruto get the courage to tell such lies? 😂😂😂😂 pic.twitter.com/38gM3BLf0z

So Charlene Ruto was selling smokies?

The name “Charlene Ruto” has become synonymous with lying, just like her dad. She is essentially telling Kenyan kids that hard effort and integrity are not prerequisites for success. She is mocking kids from underprivileged families. pic.twitter.com/Yfv2hbwVKG

Hii ndio ufala sipendangi! Charlene Ruto ati she was selling SMOKIES & KACHUMBARI during her days Daystar university while his father the chief HUSTLER was the DEPUTY PRESIDENT 🤣🤣 Hii ni kama ile ya I startled my hospital with one Panadol and my restaurant with one Sufuria🤣🤣 pic.twitter.com/KVP8oeERAx