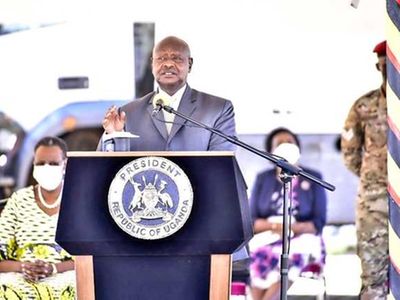 The works and transport sector was allocated Ush5.1 trillion ($1.4 billion) for integrated transport infrastructure investments with a provision of Ush400 billion ($113 million) meant for road maintenance works in an arrangement intended to benefit current road construction projects in the Albertine region as the country ramps up preparations for commercial oil production anticipated to commence in 2023.

“The huge allocations made to the transport sector are meant to speed up construction of the road network in the Albertine region and facilitate initial production of first oil by international oil companies. A combination of increased expenditure on these projects and early investments done by the oil companies will indirectly expand economic activity and boost the economy in the short term,” said Dr Albert Musisi, Commissioner for Macroeconomic Policy at Uganda’s Ministry of Finance, Planning and Economic Development.

The defence and security docket received Ush6.9 trillion ($1.95 billion), an amount that secured a lion’s share of the country resource envelope meant to bankroll planned military operations in South Sudan and in the Eastern Democratic Republic of Congo (DRC), a mineral rich trade hub that borders parts of Western and Northern Uganda and also accommodates the Allied Democratic Forces rebels, a terror group hostile to the Ugandan government.

So far, Ugandan troops are reported to have entered parts of Eastern DRC in preparation for a military offensive but the duration of this military campaign remains unclear. A portion of the defence budget allocation will be spent on construction of 30,000 housing units for military personnel.

In comparison, budget allocations made to the judiciary rose from Ush199 billion ($56.2 million) in 2020/21 to Ush377 billion ($106.5 million) in 2021/22 in a drastic move intended to support recruitment of new judges, enhancement of judicial officers’ salaries and allowances, construction of new courts and purchase of new courtroom equipment among others. The High Court judicial circuit is served by roughly 80 judges compared to a targeted requirement of 150 judges.

In contrast, a sum of Ush103 billion ($29 million) was allocated to the Uganda Development Bank (UDB) in additional capital meant for lending to distressed small businesses affected by the Corona virus pandemic following widespread business closures that have affected thousands of Small to Medium Enterprises(SMEs) since last year.

“The new budget is mainly guided by historical thinking and not a Covid-19 pandemic planning mindset. This explains the increased budget allocations made to the transport and energy sectors which are supposed to cater for ongoing infrastructure projects inspite of changing economic realities,” argued Dr Fred Muhumuza, a local economist.

We married two months ago, yet he is...

Why I switched careers from IT to personal...

Martha Karua left with egg on her face...