Ugunja police on the spot for renting out uniforms to thugs 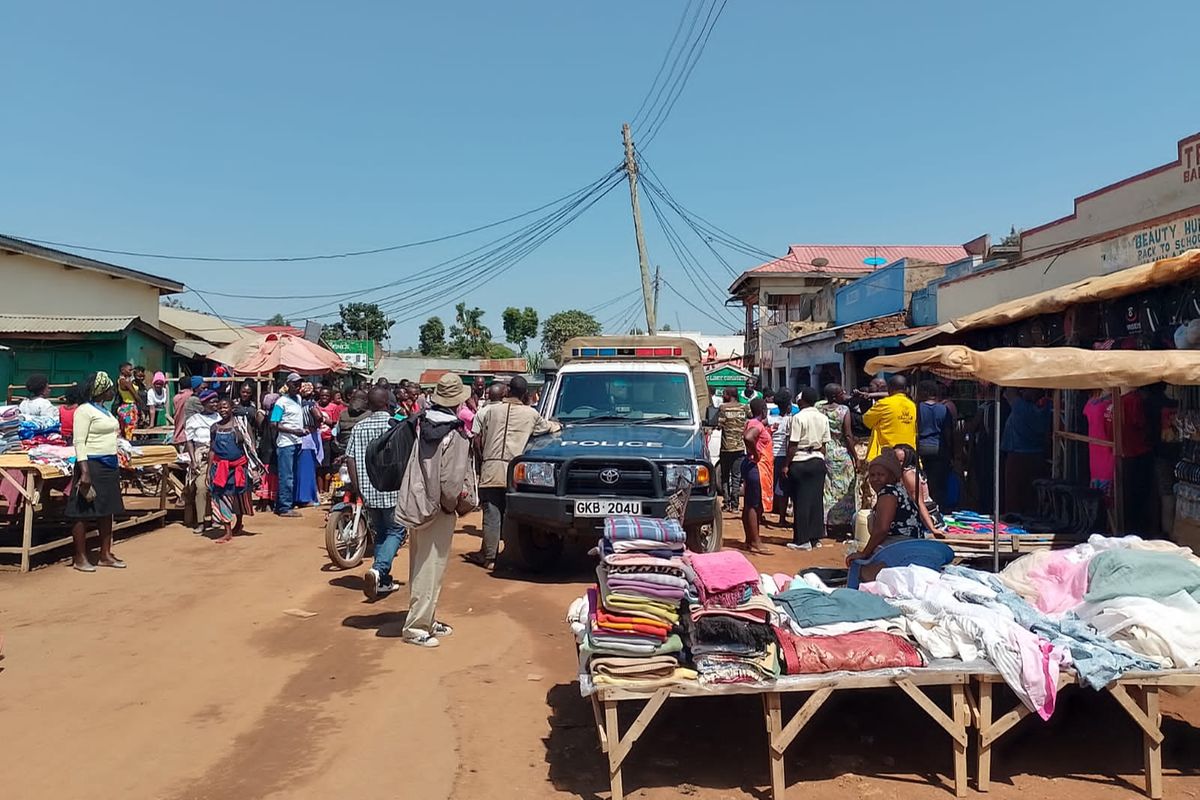 Ugunja Deputy County Commissioner Felix Watikila has called for the immediate replacement of some officers at the Sigomere Police Station suspected of renting their uniforms to thugs for Sh5,000.

Mr Watikila, who was addressing residents of Sigomere, said the station required a complete overhaul.

“The Sigomere Police Station is rotten to the core. How can police officers who have been given the mandate by the government to protect the people stoop to the level of hiring their uniforms to the thugs? What is that?” Mr Watikila said.

He went on: “Civilians are not supposed to have uniforms. Hiring out a uniform to the thugs to carry out criminal activities is like selling your country. We must act swiftly and ensure we get unfamiliar faces at Sigomere.”

Mr Watikila, who is also the sub-county security chair, expressed disappointment over what he called laxity among some officials.

“We cannot have six shops broken into in a single night and you want us to believe that the police are patrolling. All the officers are trained and some of us have been in the administration for many years. There is something going on in this area,” he said.

He also said some officers were focusing too much on following up cases of contraband brought from Uganda at the expense of other law-enforcement duties.

“Instead of ensuring that the people are secure with their property, all the officers do is follow up on the contraband goods from Uganda. Henceforth, we must get our priorities right,” he added.

He also cautioned officers who drink locally brewed chang’aa, saying it makes them forget about their duties.

“The police are not supposed to be drinking together with civilians. To make it worse, they are drinking chang’aa, which is outlawed. We must make some things straight,” Mr Watikila said.

Ugunja sub-county Police Commander Emanuel Rono said all officers who have stayed at the station for over three years would be transferred immediately.

“People who have stayed for over three years at a station develop some kind of complacency that stops them from delivering on their mandates,” said Mr Rono.

He also urged the public to work with security officers by sharing information about crimes.

But Mr Rono did not comment on the allegations that some officers hired out their uniforms to thugs to commit crimes at night.

Sigomere, Sidindi and North Gem locations are some of the areas that have reported many cases of crime, including stock theft, in the past one month.

The stock thieves, who use Toyota Proboxes to ferry the animals, have terrorised locals recently and made away with several animals.

Last week, a suspect was killed by an irate mob and the vehicle he allegedly used was burned.

“We are still [investigating]. We have also made several arrests and arraigned suspects in court in line with livestock theft incidents reported to us,” said Gem sub-county Police Commander Charles Chacha.

Last week, police arrested two people – Peter Oluoch and Stephen Odhiambo Rakwaro – after two cows that they had were positively identified as those stolen from Lundha and Asayi villages in North Gem. They were later taken to court.

Some of the livestock thieves camouflage stolen animals by smearing them with mud and ash to make it harder for owners to identify them.

“The two suspects were about to sell the cows and in order to confuse everyone, they smeared them. The white cow was now red after they smeared it with red mud, while the black one had white wood ash patches meant to confuse the owners,” said Nyabeda sub-location Assistant Chief Tom Aruwa.

He urged courts to deny the main suspect bond, saying he had lured young boys into his gang, which they said was terrorising Gem residents.

“Jarateng, who is the prime suspect, has been arraigned in court several times in connection with livestock theft and is out on bond,” Mr Aruwa said.

“Our plea to the police and the courts is to deny him bond because he is recruiting many young men, mostly students, into his ring.”

‘County 49’ airs finale as season comes to a close

Winnie Odinga: Will she inherit her father’s Luo...

Rigathi Gachagua: The making of a new Mt...

Great expectations as Brandon sails through in head...