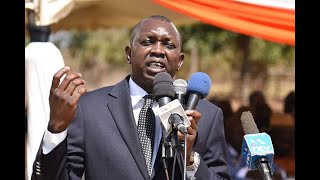 By JUSTUS OCHIENG’
More by this Author

Deputy President William Ruto’s allies have alleged a plot to kick him out of office as a fresh storm gathers in the ruling Jubilee alliance.
The ongoing purge of National Assembly and Senate leaders allied to DP Ruto and rapid changes in House committees, they say, are calculated at paving the way for the Deputy President’s impeachment.

More bloodbath is expected this week, as President Kenyatta wrests control of the party and Parliament from perceived rebels.

“They have a plan to impeach the DP, but we will fight to protect his position,” Jubilee deputy secretary-general Caleb Kositany, the de facto spokesperson of the Ruto faction of the party, told the Nation onMonday.
“They can do all they want, sack his foot soldiers in the National Assembly and the Senate as they prepare to eject the DP, but that route won’t be easy. We’ll definitely cross the bridge when we get there.”

Stung by the alleged plot, the DP’s troops have launched a campaign of extraction to discredit President Kenyatta’s administration and cast it in bad light.

Belgut MP Nelson Koech said all party leaders countrywide “have sadly been mobilised for an unworthy cause, in the process losing sight of what is important right now.”

“They’re cajoling members every other day, but I can tell you that their spirit, especially those from outside his traditional base, is growing stronger every single day.”

He added: “If the DP is forced out, God forbid, then the President must also leave because they were voted in as a pair.”

Jubilee Party Secretary-General Raphael Tuju and vice-chairman David Murathe were reluctant to comment on the alleged impeachment plans against the DP.

However, the two recently defended the purge in Parliament, saying, they were targeting “disloyal members who do not promote and protect party interests.”

“We will not tolerate deviant behaviour. The changes in the Senate and National Assembly are purely normal housekeeping processes,” Mr Tuju said.

Mr Murathe pointed out that their party’s constitution was clear on the disciplinary measures to be taken against members who contravene it.

“A member who without justification opposes party positions and policy in Parliament, and those who, do not heed the party leader’s calls do not deserve to hold any position,” he said.

Tiaty MP William Kamket, a member of Kanu, which recently formalised its post-election deal with Jubilee, did not, mince his words over the plot to oust the DP.

“If ever there was an opportunity to impeach the DP, I would be the one to move the impeachment motion. What he did to our people and to our economy is unforgivable and unforgettable,” Mr Kamket said without elaborating his claims.
Of late, Mr Ruto has maintained an uncharacteristic silence and toned down on his abrasive tweets despite the current excruciating take-down of his lieutenants.
The claims of his impeachment are, however, not new in the political arena.

In March, ODM leaders hinted at sponsoring an impeachment motion against Mr Ruto over investigations into Sh40 billion fake arms deal and killing of a police officer attached to his office.

They said the incidents, which saw the Directorate of Criminal Investigations (DCI) investigate several individuals, including former Sports Cabinet Secretary Rashid Echesa, brought the office of the deputy president into disrepute.

Senate Minority Leader James Orengo, in the presence of ODM leader Raila Odinga, hinted then that they would consider constitutional means in dealing with the DP.

“Watch this space. In two weeks, we’ll start the process that will see us deal with him,” he said in Siaya at the funerals of University of Nairobi’s Prof Gilbert Ogutu and politician Omollo Rading’s son, but to date, the process has not been initiated.

Nyeri Town MP Wambugu Ngunjiri said the DP was his own enemy and should not blame anybody for his predicament. Political analyst Javas Bigambo believes the DP has “realistically” run out of options.

“His choices are few and known…and they are three: He possibly chooses to resign, or chooses to get impeached in the fullness of time, or elect to remain insignificantly silent and quiet in Jubilee till the end of his time,” he said.

But the Tangatanga brigade, Dr Ruto’s Jubilee faction, have vowed not to go down alone and launched a campaign to discredit Mr Kenyatta, including his 2017 election win.

They have since revisited the thorny issue of the August 8, 2017 presidential server opening and renewed calls for justice for the family of Chris Msando, the IEBC ICT manager who was murdered barely a week to the elections.

Following the bare-knuckle war in Jubilee, the ghosts of the nullified August 8, 2017 presidential election results have started rearing their ugly heads.

The Senate Justice and Legal Affairs Committee chairman, Mr Samson Cherargei, an ally of the DP, has called for the opening of the 2017 presidential election servers “as ordered by the Supreme Court” during the first presidential petition of 2017 so that Kenyans can know the truth.

“As the chairman of legal committee at the Senate, I’ve looked at the quarterly report that was presented by the IEBC and some of the grey areas are issues of technology use in elections,” he said.
“So servers, as ordered by the Supreme Court, should be opened so that Kenyans can rest easy.”

Rarieda MP Otiende Amollo, one of the lawyers who represented Nasa leader Raila Odinga in the poll petition, said: “The fact that they are asking that those servers be opened to prevent future mischief is in itself an admission and a confession of wrongdoing.”

He said the DP’s allies should now go ahead and disclose the names of the individuals used to tamper with the servers.